A Passing of the Torch, Dawson vs Pascal

A rare fight between Ring’s divisional #1 and #2 takes place this Saturday which has all the markings of the traditional passing of the torch of one generation to the next generation on several different levels, not the least being the venue in Montreal, Canada. 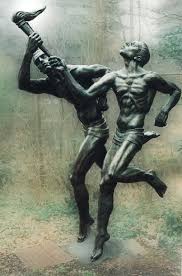 Bad Chad Dawson squares off against local favorite, Jean Pascal for a chance to pick up his old WBC belt.

Dawson won his first title with an excellent performance in lifting Tomasz Adamek’s WBC crown off him 3 years ago, withstanding the highly regarded Adamek’s trademark knockdown and late surge in Dawson’s signature fight. He has since swept the longtime grizzled veterans of the division, Glencoffe Johnson and Antonio Tarver in a classic series of fights where he also picked up the IBF and IBO titles for those who keep a bauble count.

Dawson has done everything that has been asked of him within reason, yet remains flying under mainstream America’s radar, thus needing to go into Montreal’s lion’s den to lift his old WBC belt off Pascal in a sign of the times for American boxers.

The winner will also pick up Ring Magazine’s lightheavy belt, vacant since Joe Calzaghe retired a few years back.

Jean Pascal picked up Dawson’s old WBC belt last year in a rough tough fight against Adrian Diaconu and has since defended it twice, hanging on with a separated shoulder in the even tougher rematch against Diaconu in his last outing. The Dawson fight represents a comeback from shoulder surgery and rehabilitation, 8 months of ring rust which could perhaps be crucial to the outcome of the fight.

Dawson, however, has been at the top longer with more quality rounds against ranked contenders and champs than has Pascal. Dawson is a fundamentally solid boxer/puncher out of the southpaw stance with good height and speed, and if that weren’t enough advantage, former lightheavy champ and now trainer Eddie Mustafa Muhammad has been directing his training.

Pascal has to overcome his shoulder surgery and ring rust, but his advantages will be some speed of hand and foot, his hometown, and an unorthodox somewhat freewheeling style that makes fighting him difficult. Dawson will be the best boxer and best fighter he will have faced by a long shot, so Pascal will have to show more discipline and and a better gameplan than he has shown in past efforts.

Should be an interesting clash of styles with the flashy, emotional Haitian transplant Pascal picking up plenty of energy from the Montreal crowd who really get behind their fighters which may well draw out the safety conscious Dawson into some dramatic exchanges with some unseemly brawling that fight crowds love to see in their warriors.

Finally, the new Ring champ will be a young tiger for the first time in ages.

I predict a wide Dawson unanimous decision, but if Pascal has something in reserve he has yet to show in his career, he could sneak in with a dramatic hometown decision with a best effort.

Should be a good’un and could be the start of a much needed series, so there you have it.