This Saturday at the MGM Grand, two top super banty boxer/puncher types meet in a crossroad fight of sorts, Toshiaki Nishioka vs Rafael Marquez for the WBC strap.

The 36 year old Rafael Marquez is the underrated brother of Juan Manuel Marquez and is still a dangerous fighter looking to regain his mojo. The 35 year old Toshiaki Nishioka is one of my favorite fighters to watch, very much underappreciated due to his exotic career staged mostly in the rough and tumble Japanese pro boxing venues.

Some top notch boxing that is almost guaranteed to heat up into a classic knock down, dragged out war, so catch it if you can.

Bad Chad Dawson has rolled the dice in midstream to replace his new trainer, Emanuel Steward with his old trainer, Ice John Scully, who first got Dawson up to speed early in his career.The splits seem to have been amicable, and perhaps so since there’s been nary a squeak out of Steward. Dawson is still open enough to reestablish training with Scully weeks before his challenge for his old WBC strap now held by Bernard Hopkins.

Scully is a well respected former lightheavy contender with the experience to formulate a plan to dethrone Hopkins. The opportunity is surely his biggest moment as a trainer and it is certainly a critical juncture fight Dawson needs to win to stake his claims to the lions share of future big fights.

Welcome to Ice John’s very own website and register your thoughts on the fight here:

Bernard Hopkins has been on a hot roll of late after a mysterious resurgence against Jean Pascal. Accusations flew that Hopkins was on Human Growth Hormone, HGH, which didn’t prevent him from being knocked down hard twice by the feather fisted Pascal.

Had Hopkins been fighting with as much vim and vigor as he showed against Pascal, his record would certainly be better, but Chad Dawson is a completely different fighter than Jean Pascal and who knows what version of Hopkins will show up at age 46?

When He Was King

Hopkins’ last knockout was another decade ago when he still had hair, but he was suspicously fragile against Calzaghe and Jones and may be ripe for the big KO. Thing is that Dawson is something of a lazy boxer, preferring to sit back and let his natural talent do all the work and then take the decision, not a KO artist. It did seem like he had Pascal ready to go when the headbutt stopped their bout, so maybe there’s some hidden knockout potential in him waiting to be released.

Of the Ring ranked southpaws Hopkins faced recently, he was hard pressed against Winky Wright who was brought in as a guest trainer for Dawson for this fight.Then Hopkins looked for all intents to be quitting in the ring against the talented Joe Calzaghe as Hopkins attempted to stop the fight with the worst canvas acting job seen in a boxing ring since Sonny Liston hit the deck against Muhammad Ali.

Shane Mosley and Victor Ortiz wanting to hug and kiss Floyd Mayweather instead of fight him, but Dawson should be very suspicious of being suckered into this seedy web and concentrate on taking the fight out of the judges and the ref’s hands. He won’t be getting any favors in this fight, but what he will get is a serious case of looking bad if he can’t concentrate on boxing because that’s the secret to Hopkins’ longevity.

Hopkins doesn’t want a fair fight, he wants to frustrate by fouling and grappling in between running around the ring and then cop an academy award decision. He knows Dawson is a superior boxer at range, so Hopkins will likely be rushing him much like he did Pascal which made for an ugly fight. Hopkins is legendary for what he calls Philly style head butts that many modern fighters just can’t handle.

I don’t recall Dawson ever having to fight inside except the first Johnson fight which many thought he lost, but if he can’t, he’s got to have some good foot movement to maintain his best fighting distance. His footwork and balance have always been excellent, but this is a different fight than he’s used to.

The undercard is compelling with Antonio DeMarco going against former champ Jorge Linares for Gary Bradley’s old WBC strap. New hotshot Danny Garcia goes against ex champ Kendall Holt in an IBF eliminator and Pauli Malignaggi is staying busy as he awaits his next title shot.

Not a bad night to be at the fights if Hopkins shows up to fight and can pull out his old Kelly Pavlik gameplan. We’ll see soon enough who wants it and who’s smart enough to take it.

Posted on September 13, 2011 | 1 comment
The fight has been officially announced with attendent press conferences and 24/7 tapings and is now less than a week away. Floyd Mayweather will be coming out of his latest retirement to challenge Vicious Victor Ortiz for the WBC welterweight title at the MGM Grand in Las Vegas this Saturday, September 17th.

Apparently Mayweather has a residency at the MGM Grand since his last 5 fights spread over these past 5 years have been fought there starting with his hotly contested win over Oscar de la Hoya in 2007. He skipped the previous 5 years at the MGN Grand after his hotly contested win there over Jose Luis Castillo in the first fight, so maybe he has a numerology thing goin, but wait, there’s more. 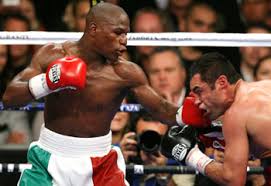 Mayweather’s last 5 fights will have also been promoted by Golden Boy, so he has definitely settled into the comfy confines of scheduling in his advancing years. He’s become the proverbial “house” fighter after a career of consecutive WBC belts, flitting in and out of retirements and fights on personal necessity.

Ortiz won the WBC  title from Mayweather stablemate Andre Berto, outboxing, outworking, and outslugging the surprisingly game Berto who looked tired and out on his feet at times but couldn’t be stopped. Then Ortiz shocked the boxing world by announcing via Twitter that he would be fighting Floyd Mayweather who promptly shot down that idea as foolish in a fluster of twitterings that pass as the fighters’ press releases these days.

Then lo and behold, a month later the big announcement that the fight’s on, so Vicious Victor wins the opening salvo, but wait, you just had to know, there’s more.

Mayweather as most know is highly compromised legally, facing down more than a half dozen criminal and civil lawsuits in what may prove to be the meltdown of his career. He has pulled out of fights before and now he’s back needing a new cash infusion, so what happens in the ring?

The usual suspects will run off on the sublime boxing skills of Mayweather, dismissing any chance by the 24 year old Ortiz as too raw, too crude, too inexperienced to properly match up against the highly credentialed Mayweather.

This of course ignores the rich history of aging all time greats being beat by lessor fighters too many times to be counted. Stuff happens, and sometimes it happens for well known reasons that are ignored or glossed over.

The talented Victor Ortiz was heavily promoted by Golden Boy as the new star in the making. Things then came unstuck when he was matched against the huge hitting Marcos Maidana in an entertaining slugfest that saw them swap knock downs until Ortiz pulled the plug. Howls of outrage followed with no shortage of insultive suggestions regarding what Ortiz could do with himself.

Since that time, he’s been sucessfully matched against light hitting, top boxer types, Nate Campbell, Vivian Harris,  Lamont Peterson and Andre Berto, all but former champ Harris being Ring ranked. Ortiz pretty much had his way with them though he was most unfortunate to only secure a draw against Peterson who was knocked down twice. Again Ortiz took criticism for backing off and not going for the kill, but that’s the typical unsupported bias through boxing history used against sluggers when they sucessfully use their boxing skills instead of slugging. We seldom see boxers criticized for knocking out opponents, so go figure the average boxing critic if you dare.

But guess what folks, Mayweather is the tip of the top boxer types who has proven to be a featherduster since he moved to welter. He needed an assist from the turnbuckle to finish off the game Ricky Hatton, a fluke accident rarely seen and not likely to happen again in his career.

Ortiz is still a developing fighter, so it’s hard to gauge his realistic chances, but he has the raw size, strength, and talent to win the fight against the 34 yr old Mayweather who may be losing his focus. Ortiz has at least made the first part of his dream come true, a signed fight with Floyd Mayweather who ain’t the easiest guy to get a pen to.

The short of it is that the 24 year old Ortiz is in ascendency whereas Mayweather may or may not be in decline, but now is when their career timelines intersect. Does Ortiz have the heart and skill to finish what Sugar Shane Mosley started? Will Mayweather be distracted by legal woes and handicapped by ring rust or will he outclass the kid at every turn? Has Ortiz’s recent stint at modeling underwear gone to his head?

Or my favorite Mayweather question: Any controversial reffing or judging decisions?

I know this, Mayweather was rocked harder than he had ever been rocked by Shane Mosley who has modest power at the weight. He showed great instincts to not only survive, but have Mosley on the back foot by round’s end.

Can he do it again?

The southpaw Ortiz was a very powerful junior welter, so he’s a dangerous fight for anyone, but maybe team Mayweather see the typical flaws of a young gungho fighter still trying to please everyone yet pleasing no one yet. Ortiz has shown he can be put down on a regular basis, so if Mayweather can put Ortiz down, could be he could showboat his way to victory with no further effort.

In an special Golden Boy promotional co-PPV arrangement, unbeaten Mexican sensation Saul Canelo Alvarez will be making his WBC defense of his light middle title against Alfonso Gomez in what should be a breezer. Is this the setup for Mayweather’s challenge to his old WBC belt that he never defended, a battle of undefeateds against Alvarez?

Here they are looking rather chummy as they keep their options hot:

It’s up to the fighters now. Could well be the kind of fight you’ll remember for the rest of your life or one of the worst, so let’s hope for the best and leave the worst for later.