Floyd Mayweather Jr Off to “The Big House”

Well, folks, it finally happened. The other shoe finally dropped in regards to Floyd Mayweather Jr‘s plea arrangement on multiple charges of domestic abuse when the Clark County judge in Nevada sentenced him to 90 days detention at the Clark County Detention Center.

The full sentence includes 3 suspended months which could be reinstated if Mayweather cannot mind his Ps and Qs during lockup. Part of the plea deal was the dropping of felony battery charges which could carry many extra years of imprisonment if reinstated. You can catch up to more of the history of his charges here:

Mayweather had recently reserved a May 5th date next year at the MGM Grand in Las Vegas for his next bout, but that could well be “money” flushed down the drain given the length of the sentence. A desirable high profile fight is not likely be secured on such uncertain notice,  not that his last alleged fight against Victor Ortiz was such a fight.

Mayweather will be 35 years old at the time of his release, traditionally past prime for most fighters and athletes, but regardless of the plethora of Mayweather personal flaws, he tends to stay in some semblance of training between fights. Many fighters blow up their weights and have to constantly be trained down to make their division limits, so perhaps traditional age limitations cannot be placed on him.

The question is whether or not this represents a long drawn out process of the wheels coming off of his career during his “retirement and comeback” phase of his career. His bitter retirement after the controversial Oscar de la Hoya supermatch that smashed all PPV records for a single fight burned a lot of boxing bridges, but all was forgiven during his comeback fights that generated more interest than all of his entire previous career. 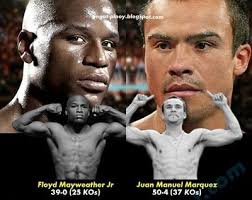 Though his comebacks have included Ricky Hatton, Juan Manuel Marquez, and Shane Mosley in high profile matches, the Philippine Pacific Cyclone storming out of Manilla named Manny Pacquiao has sucked all the wind out of his sails and left the well accomplished Mayweather short on the awards, accolades, and rankings as the last decade closed out.

You can read about their compelling parallel career developments through the decade here:

Needless to say, the fabled on again-off again super matchup against Manny Pacquiao seems to be no more than schoolboy fantasy at this point. The 33 year old Pacquiao has been on more than a tear through boxing’s ranks, he finally got elected to his congressional district after years of hard campaigning all while logging an incredible number of miles back and forth in international air travel as he pursued his remarkable fight career.

At some point, there has to be a toll on his boxing and life. His overriding ambition has always been to be elected to the Philippine Presidency, so the Floyd Mayweather Jr super fight is fading fast as his next career priority. He was supposed to be retired by now, but the money on the table is simply too big to walk away from, so he has amazingly carried on two very demanding careers.

If Mayweather does keep the May 5th date intact and is released in time for a reasonable training camp, there will be no shortage of lesser contenders and champs willing to strike at a low ebb in his career.

His last fight with Victor Ortiz may well to be the farce of the new millennium. The only thing missing was Big Show storming the ring to pile drive the lot of them during their frequent nuzzles as they exchanged sweet nothings. Nobody in boxing was calling for the Ortiz fight, and Mayweather even denied he was fighting Ortiz.

Could Ortiz be the last fight of his career?

Prior to that, he backed off the date of the showdown he requested against Manny Pacquiao and had to be forced into the ring against Shane Mosley he was so reluctant to fight again, but he desperately needed the money after the government put a lien on his Marquez purse for back taxes. Mike Tyson started exhibiting the same traits as his career wound down, and not surprisingly Tyson seems to have become a favored member of Mayweather’s large entourage.

It’s a long month before Floyd Mayweather is to report to serve his sentence, so his family and friends can only hope he doesn’t land in more hot water during that time. Then he has to play his get out of jail card according to the terms set by the prosecution and detention officials.

The glitter of Las Vegas will be a bit grittier and grimier in the immediate term as history and boxing anxiously await the final return of Floyd Mayweather Jr.