Oddly enough, the native Mexico City born Marquez hasn’t boxed in Mexico City since 1994, fighting primarily in California and Nevada, so that’s some kind of 18 year Mexican homecoming he may have coming. Truth be told, Marquez was always the odd amigo out in the popularity stakes dominated by Los Otro Amigos,  Marco Antonio Barrera and Erik Morales who often fought in Mexico, but I’d guess his stature has grown there since they have more or less been in the retirement phase.

Since almost all of Fedchenko’s bouts were staged in Ukraine, not much is known about him other than his record, 30-1, 13 KO as the current “WBO European Lightwelterweight titlest.” The only name opponents on his record are his sole majority decision loss to Kaizer Mabuza and a unanimous decision against DeMarcus Corley.

It goes without saying that Serhiy “The Professor” Fedchenko has never been stopped and is following on the heels of a stampede of talented Ukrainian champs and contenders in boxing. With only 13 KOs of European quality fighters, he is a boxer, not a slugger,  and boxing his only hope since the last 5 of Marquez’s 6 losses have come at the hands of highly rated boxer types of various styles, Freddie Norwood, Manny Pacquiao x2, Chris John, and Floyd Mayweather Jr.

Fedchenko is obviously not in the class of the above, but he could move up to the bigtime if he were to knock the heavy favorite Marquez off his throne. Hungry East Europeans have made a pretty fair name in boxing doing just that, but can Fedchenko adjust to the manic atmosphere likely to accompany this fight? 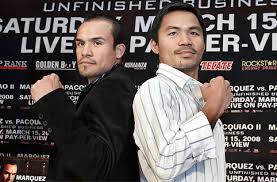 Manny vs The Juan

I see this as a stay busy, wow the Mexican crowd with a homecoming in advance of Marquez’s next blockbuster fight. That could come against Manny Pacquiao in an epic 4th encounter IF Pacquiao wins his bout against undefeated Ring P4Per Timothy Bradley, a much bigger challenge and certainly not an easy victory.

By credentials alone, Danny Garcia wouldn’t even be in the same ballpark as Erik Morales, but such is not the way boxing works. Garcia is young and hungry and owns recent wins over Nate Campbell and Kendall Holt, so now he’s matched against the grizzled old Mexican warrior attempting one last go at glory. 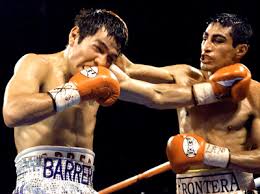 The Heyday of Morales vs Barrera

Where to start trying to figure the meaning of a bout like this might begin with the ill advised comeback of 35 year old Erik Morales after retiring several years ago. He had been knocked out consecutively by the rapidly rising Manny Pacquaio and then outmuscled and outbrawled by then WBC champ David Diaz when he moved up to lightweight.

Look up Mexican Warrior in the dictionary and Erik Morales will be among the definitions, yet after a long and brutal career as one of boxing’s brightest stars, he just didn’t seem to have it any more. Complaints about ringing in his head caused some concern, so his retirement was a relief for all those interested in his well being.

El Terrible vs Hands of Steel

His weight promptly blew up to an unrecognizable whale scale, so fans were still concerned about his health, but after 3 yrs on the banquet circuit he returned at a flabby 147 lbs to outpoint the forgettable Jose Alfaro. Gone was his timing and balance, but his strength of will to fight remained, so it was onward and upward to Willie “Hands of Steel” Limond and Francisco Lorenzo as he gamely boxed his way into a semblance of fighting shape in more forgettable fights. The Lorenzo fight saw him being well whipped and out of clues in spite of taking the unanimous decision. 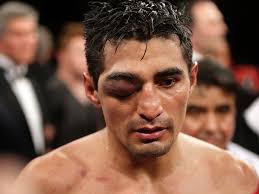 Morales managed to go the distance in a terrible fight against Maidana who should have gotten the early stoppage. Morales’ right eye was closed in the 1st round by a vicious Maidana uppercut and he took a beating. Eventually Maidana realized he had a real tough fighter in front of him who wouldn’t go easily and lost his stomach for the sometimes cruel brutality of  boxing , so Morales promptly took advantage of the weakness and went after Maidana hard, thus giving his fans the support they had been waiting for.

Truth is, by the end of the fight Morales had something of the look of the young Eric Morales when he refused to buckle and stung Maidana with some well placed shots. Still, there was no reason at all to make him take an unholy beating like that, but some fighters just cannot leave gracefully.

Though he lost the bout, his name was back in the public eye and was floated in with potential bouts with Floyd Mayweather Jr, Juan Manuel Marquez, and Amir Khan. Instead the WBC maneuvered him into another forgettable bout against Pablo Cesar Cano for the title they had shamelessly stripped from undefeated champion Gary Bradley. 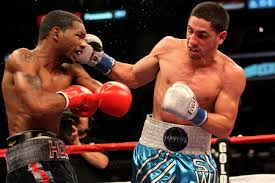 So now they call Morales a champion and he defends against a quick, prime boxer type in Danny “Swift” Garcia in what could be another ill advised 12 round war on the Morales body which just saw the bout delayed as Morales had some kidney stones removed.

The hope is that Morales is starting to physically look like a Mexican Warrior instead of the Tijuana Tamale he resembled at the start of his comeback, so the bout has the potential of a high action classic to it. It helps that Garcia is not the big puncher that can discourage Morales who will likely be the aggressor in this bout.

All I can say is the 23 year old Garcia best not take this version of Morales lightly if he wants to make any inroads in boxing. He wants to swap his 7th Ring rating against the 5th rating of the old man.

Maidana took a lot of flack for allowing Morales back into the fight after running out of gas and desire in the mid rounds. Morales knows he could be back in the business end of the next big fight against  Floyd Mayweather Jr, Juan Manuel Marquez, and Amir Khan with a resounding victory over the kid.

No fighter ever had any more desire than Eric Morales, but is the kid smart enough, quick enough and in good enough condition to overcome that desire and ring experience? Their intertwined fates await the unraveling hour as the days and seconds tick down to the sounding of the first bell.