A Failure to Fight–Rematch of Hopkins vs Dawson

Officially the “event” is scheduled Saturday, April 28th at Boardwalk Hall in Atlantic City. Maybe a fight will break out this time, but the sad fact is that not many boxing fans wanted to see the original farce and fewer still likely to care about a rematch of what never was.

I predicted Dawson wouldn’t be getting any favors in the leadup article to the original, and sure enough the California commish overruled the referee decision of a 2nd round TKO of Hopkins to a NC, No Contest. The WBC ruled it a TD2, a Technical Draw, so Hopkins retained his title and million dollar purse and gets to reprise another day of moaning, crying, and rolling on the ring canvas for more millionaire pay.

Chad Dawson is largely blameless in the travesty save signing on to fight the geezer legend who more and more often doesn’t fancy a good fight anymore when he made his name against Tito Trinidad and Kelly Pavlik. All Dawson did was shrug his shoulders in an attempt to release himself from the clawing death grip Hopkins had placed him in after coming in hard with a UFC flying knee for his offense.

Hopkins is definitely NOT in the old school vein of his “role model,” Archie Moore, who swept the floor of his era with relevant heavyweight contenders in between defending his lightheavy title for a storied decade as one of the most revered P4P fighters in history. Moore was putting big guys on the canvas with their lights turned out, not moaning to the ref who could’ve cared less in an era where men were fighters and not wearing silly little Halloween fright masks into the ring like schoolboys looking for candy handouts.

You can read about the stark contrast between Archie Moore old school tough and skilled against the modern softie, Bernard Hopkins:

I’m generally not one to disparage a fighter for mere losses or one off poor performances, but Bernard Hopkins has been milking the boxing world for a while now. Dawson has to play along in the WBC fun and games if he is ever to return to his formerP4P status that he lost with the dubious stoppage by the Montreal ref on a minor cut in the Pascal fight.

What a 6-3 highly skilled boxer Dawson is doing ducking below his waist to avoid an old guy with no teeth in his mouth or punches in his mitts is something he and his trainer Ice John Scully will have to address if they ever hope to make Dawson the household name his skills and talents deserve.

You’ve been forewarned, so watch at your peril.

When Irish Eyes Are Smiling–Tyson Fury vs Martin Rogan

Now I’m going on record to say that I will be the last to interfere in the Irish genological claims being thrown about for this latest Irish brouhaha, but could be this is the best, most dynamic all Irish fight since Sailor Tom Sharkey got tangled up with  Peter Maher in New York City back in 1897 some 115 years ago.

Maher was coming off his all too brief claim to the heavyweight title in another all Irish fight of sorts when he knocked out Aussie-Irishman Steve O’Donnell in the first round for James J Corbett‘s briefly vacated title, but then lost by 1st round KO to Bob Fitzsimmons in a legendary bout on a spit island in the middle of the Rio Grande River at Langtry, Texas.

The California judge ruled that California had no such laws regulating prize fights, so there it is folks, proof positive that boxing controversies and multiple title claims are nothing new under the sun.

The Sharkey/Maher fight was a wild melee typical of the brawling Sharkey style with both fighters continuing to punch it up with each other and assorted cornermen after the bell sounded to end the 7th round. After the police stormed the ring to restore order to the proceedings, so the shaken ref declared a draw before finding more peaceful surroundings.

Both Sharkey and Maher were evenly matched at 173 lbs.

Fast forward more than century later and young Tyson Fury will be 6-9, 250-260 lbs and  Martin Rogan  goes 6-3, 230 or so, so these are some really big boys toeing the scratch line these days for the “vacated” Irish Heavyweight title. Don’t know if there will be an old fashioned Irish donnybrook breaking out after the bell sounds for the rest period, but the fight itself has the mark of some old fashioned brawling action mixed in with the long jabs that Fury needs to pile up the points and set up the projected finishing flurry.

We can only hope and pray that Fury’s Irish Traveller fans don’t get crossed up with the local Belfast crowd since Fury and Rogan appear to be on very good personal terms.

Martin Rogan only a few years ago was the toast of Ireland and Great Britain after winning the Prizefighter tourney out of the blue. The popular Belfast cabdriver then leveraged his fame to dispose of former Olympic gold medalist Audley Harrison before becoming the first fighter to ever knock out Matt Skelton. That victory netted him the British Commonwealth title and his first ever defense against British contender Sam Sexton, a classic brawler/boxer matchup with plenty of dramatic ebb and flow in the action. Unfortunately for Rogan, he turned into a gentleman brawler at the wrong moment when he had young Sexton reeling into the corner out on his feet. As Rogan moved in for the finish, Sexton spit out his mouthpiece and Rogan honorably stepped away so that the ref could rinse it and refit it to Sexton. It was a classy move by Rogan whose tough looks belie his sense of fairplay, but not the smartest move in a prizefight. Alas, the ref stopped Rogan only a few unfortunate moments later because of his rapidly swelling face, an all too familar miscarriage of fate found in life’s misfortunes.

It was a terrible ending of a fine night’s fight and only got worse in the rematch when Rogan retired after 6 rounds, citing an injured shoulder. He came back against a couple of lackluster journeymen in 2010, but has been inactive since then and will be weeks away from his 41st birthday come fight night. 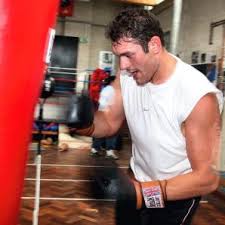 In short, nobody knows what Rogan has left, but his brawling style is not one to gather much rust. Fury did look surprisingly vulnerable in his last go against  the lusty Canadian brawler Neven Pajkic when he was dropped hard with a right hand. Though Fury was up quickly and seemed to be OK, Rogan’s power has been proven at a higher level. A healthy Rogan could present a clear and threatening danger to Fury if Rogan has his timing back.

Rogan may further get an assist by the rotating cast of trainers Fury has been going through in his short career. Tyson Fury has become a consensus top 10 ranked heavyweight who more than anything needs a top trainer who matches his personality and style and then stick to him. Many are the downfalls when a fighter starts switching around trainers on a whim.

That said, odds will be heavily stacked in Fury’s favor for a good reason, so something has to give and I suspect it will be Rogan going out with his honor intact on his shield. Tyson Fury is still physically talented  even if his consistency and stability may be in question.

To wit: “The ultimate Irish warrior was Cucuhalian, everybody knows that. Now Rogan and I will decide who is the rightful heir to his throne and I have no doubt it will be me.”

The game plan is a fun night of smiling Irish eyes as Fury consolidates his Irish support in advance of a projected heavyweight title shot coming soon, very soon.