Yupsir, for many if not most of us boxing fans, Joe Smith Jr ticks all the boxes as Fighter of the Year, the KO of the Year, the Round of the Year, and the Upset of the Year. The self described “special one” Bernard Hopkins tapped common man Joe Smith for his pity farethewell party set up by Oscar and HBO, and he certainly did not disappoint. Joe executed Executioner  with a highlight KO for the ages against all the odds and all the suits stacked against him.

Previous to that there was the 1 round demolition of ascending and well respected Contender, Andrzej Fonfara, who fans know beat the silly putty out of WBC beltholder Adonis Stevenson to no credit from the judges. Smith was never even considered a prospect much less a fringe contender, but here he is jumping all the queues ahead of him to a top Ring ranking. Joe Smith Senior must be popping all the buttons on his shirts in pride.

!!!From Coulda Been a Contenda to Top Dog!!!

Here is the video of the KO for the Ages followed with relevant stills sequencing the action:

Entrance of the Executioner

White Boy Hands to the Rescue!

Unceasing Tears of a Lifetime!

The Bernexit of “The Executioner or is it still Alien?”

Bernard Hopkins, 55-7-2, 32 KO, takes on boxing’s newest darling, Joe Smith Jr, 21-1, 18 KO, in a 12 round WBC International light heavyweight title fight from the Forum in Inglewood, California this Saturday, December 17. Perhaps sadly, it will be broadcast by HBO, whimsically entitled “The Final One.”

We can only hope not fatally since Hopkins has been unofficially retired after Sergey Kovalev beat the tarballs out of him two years ago not to mention he’ll be about a month shy of his 52nd birthday. Why Hopkins wants one last fight has to do with his ferociously insecure ego of not wanting to retire on a defeat, that and needing to be coddled with extra “Special” accolades after mostly anonymous beginnings in the first half of his career and a much mottled latter half of his career where he’s been promoted like the mysterious meat item on the corporate menu by obligated announcers lest they offend powerful corporate bosses.

That said, if you’re Ol’ Man Stinker in desperate need of the newest contender to beat, Joe Smith would be it. That is no knock on Smith whose day job has been as a union construction worker in the Big Apple. He may well have many as yet undiscovered talents going for him, but the simple fact is that he’s been a career New York centric fighter in small halls against fellow clubfighters. He’s a good lookin’ kid as far as base level physical fighter attributes, and he obviously packs a punch as he showed in his one round blitzkreig against Andrzej Fonfara, but that perhaps partially the fault of the Fonfara team rightfully underestimating Smith based on his limited record.

I shudder to remember when fellow construction worker and derided journeyman underdog Glen Johnson brutalized big favorite Roy Jones Jr in one of the most horrific beatdowns in modern history. Jones took a savage whooping that left him for all intents quite literally dead on the canvas and took some long minutes before he was able to be carried to his stool and many more minutes before he had recovered enough to leave the ring with assistance. Glen Johnson, unlike Smith, was well experienced at the highest levels of boxing at that point. Joe’s logged a career total of 73 baby rounds to Hopkins’ 506 mostly either easy rounds against nobodies, or stinker rounds against the elite. So on paper it’s hardly fair fight but for that single knockout round against Fonfara.

Let’s at least acknowledge Hopkins’ few best fights where he fought as clean as capable, yet still mixed in with hitting on the break against Felix Trinidad for example. Tito saw the ref wouldn’t protect him and fought in kind until he was buried in Hopkins’ dirt, so all in all it was a equal fight save Tito hopping up two divisions to middleweight where his slugging couldn’t hide his lack of boxing skills. And then there was Hopkins’ crowning achievement in expertly throttling new middleweight champ Kelly Pavlik at a 170 lb catchweight. Hopkins likes to brag he ruined Kelly mentally, but facts are after winning the title Pavlik shattered a window at home in a drunken incident that required surgery to repair the tendons that led to the dreaded staph hospital infection that at one point threatened his life and caused cancellation of a couple of fights. Pavlik could never be the same fighter afterward, going into seizures and seeking treatment for alcoholism, so of course his career ended up prematurely since he was no longer medically fit to fight.

The really good news: Likely the best fight of the night will be when new champ Oleksandr Usyk defends against tricky southpaw Thabiso Mchunu in one of the best cruiserweight matches that can be made. Usyk has been looking mighty impressive for a guy with only 10 pro fights. I suspect this to be high end controlled violence for as long as it last as both can box and punch very well. Both are southpaws which should make the action even trickier.

Meanwhile, nobody can know how the Hopkins/Smith fight turns out because of fighter unknowns going into the bout, but typically, I smell another Hopkins’ stinker, he simply can’t help soiling himself when push comes to shove. Will Smith get the appropriate high end sparring needed, ie the 101 + advanced course of defense against headbutts, low blows, hitting on the break, elbows, and unceasing grappling for such a dirty foe? Does Hopkins still have any reflexes, chin, and heart left after the Kovalev beating? We already know Joe is the hungry one not looking for a mere hand out, but ready to fight for what’s his. Meanwhile Hopkins has long been sleeping on silk sheets in silk pajamas in his mansion before pulling his typical wink-wink mugging act in the ring. Hey, who says boxing can’t be like ‘rassling?

The battle of the trainers is also striking with Smith employing the unknown Gerard Capobianco as opposed to Hopkins dumping his 2nd trainer, Nazim Richardson, just like he did his first, Bouie Fisher, not by letter or to their face, but rather just coldly forgetting they ever existed. He instead hired  John David Jackson in replacement, yet says nothing has changed for these preparations. What, he thinks were born yesterday? This is touted as his last fight as written into his contract, but he’s welched against his word plenty and will do so again when convenient. One also has wonder if he is still stiffing waitresses as he was notorious for doing not so far back ago. He smiles the snaggly toothed grandfatherly smile, but this is not a nice man.

Oh, and PLEASE, let us all pray together that ol’stinker ain’t coming out in pink shorts. Roll them dice boys, it’s another boxing crap shoot.

Ol’ Man Stinker vs The Kid

Though this pairing of a fat Mexican against a packed Kiwi down under in New Zealand seems unlikely because of ample Ruiz girth that we rather enjoy our mirth with, this fatboy knows how to fight. He’s very much like Tony Tubbs, Buster Mathis, Tony Galento and Willie Meehan before him, but can he match the girth of achievements of Big George?

We’ll find out after a really bad bummer year for boxing. Both have been very active, so this early December Christmas present for we the fans will be the 4th fight for each this year. When the fight was announced, Parker immediately went public with a painful recollection of the first sparring encounter between the two that left him with a huge cut in his mouth that kept him from eating for a few days. That, of course, was then, with this being now and both more experienced. Parker has faced better opponents the past couple of years whereas Ruiz slacked off in 2015, perhaps due to personal problems. His weight this year has been between 248-253 lbs which is a good range for him considering his past fluctuations, but supposedly he’s targeting 245 lbs for this fight.

As a regrettable side note, Anthony Joshua defends his IBF heavy title against journeyman Eric Molina on the same date in Manchester, but the good news seems to be that finally all the wheels got greased to put both Josh’s IBF belt and a WBA Super belt tossed in for added incentive against Wladimir Klitschko in spring of 2017 in an expected sellout of Wembley, the current capacity of 80,000+. Not to worry for fans though since there are over 2000 toilets to choose from.

Here these dynamic former spar mates are in Las Vegas after attending the Pacquiao/Vargas bout. The size differential is deceptive because Parker as the bigger is out front when in fact Ruiz will come in 10 lbs + heavier: 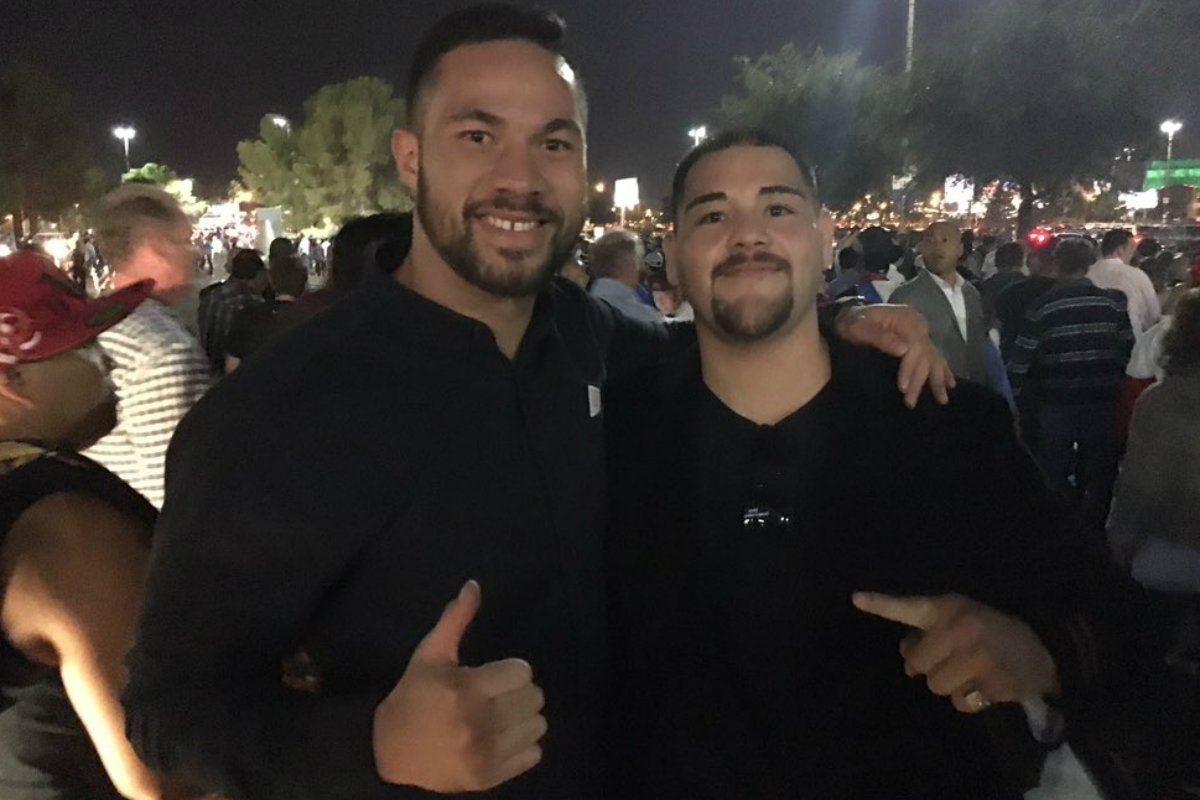 Samoan Prime Minister Tuilepa Alono Sailele Mallelegaol is said  to have been the primary financier for the fight so it could be held in New Zealand. To wit: “We are proud to be able to support our son Joseph Parker in his quest to become the first Samoan world heavyweight champion, and believe he possesses the qualities required to succeed, strength of body, mind and soul. In addition to this, this event will be a great opportunity for Samoa to promote our beautiful country to what will be a massive international audience.”

An additional wrinkle to this fight is Bob Arum has obtained 50% of Parker and other Duco Event fighter contracts, so will be co promoting him and them for the immediate future including this fight. Top Rank, win, lose, or draw, are back in the heavyweight champion biz again.

I really like the pace and skills of Parker, so of course I think he wins, but I also think Ruiz may possess hereto untapped potential waiting to be released, like maybe for this fight? Regardless of the results, the die is cast. Either the first ever Samoan or Mexican will become a world champ, unless……unless there is a draw or other such monkey business that boxing too often brings to fight results, yet still…only in boxing!

Forget about the Ring Divisional #1 and 2 divas, Eric Molina and John Molina represent the highest aspiration and noblest intent of the originators of the earliest boxing rules meant to clean up the outlaw, no holds barred nature of bareknuckle fighting that evolved into modern boxing.

These are effectively career journeymen who have fought hard and well, but fell short at the highest levels, but because boxing has so dishonorably self inflicted itself these many years, they are now contenders challenging 2 very strong champs fortified by their hometown setting. Eric goes against Anthony Joshua in Manchester, England, and John goes against Terence Crawford in his hometown of Omaha, Nebraska, tough tasks for even the best fighters to crack much less journeymen, but here we are.

So here’s atribute for all these journeymen who provide the fuel to keep boxing from further sinking in a down era where most fighters cannot support themselves on their poor earnings much less get proper training. I know Eric works as a teacher down in the Rio Grande Valley area of Texas. Boxing fans should thank all these undersung heroes who are the true keepers of the eternal flame of the originators of boxing.

And remember folks, there have been bigger upsets than what these two represent, so hope always springs eternal.