Ace of Spades~Canelo vs Golovkin For The Glory

Saul Alvarez, 49-1-1, 34 KO and former WBC champ challenges unified middleweight champ Gennady Golovkin, for all his titles, HOWEVER, Canelo still holds the Ace of Spades in this dust ’em up, the Ring middleweight title he won off Miguel Cotto 2 years ago. That would, of course, be this Saturday, September 16th, in Las Vegas at T Mobile.

Canelo’s last fight was supposed to be an old school Mexican heavyweight shootout against Julio Cesar Chavez Jr, but Canelo amazingly unveiled a new, high octane, bob and weave aggressive offense utilizing lateral in and out movement that proved to be way too much for Junior as the complete pounding of him demonstrated. This was the best anyone has seen out of Canelo, so now he risks health and legend going against a modern day MONSTER in Golovkin, 37-0, 33 KO who only just lost his 23rd consecutive KO streak, accumulated over a 10 year span in his last fight against a running Danny Jacobs. Speculation ran rampant when training pics 3 weeks out showed Canelo ripped to the gills as usual, and, gasp, the titanium forged Golovkin looking like the Pillsbury Dough Boy.

Naturally the frothing, slobbering anti-social media experts concluded that Golovkin must be SHOT now at 35 years of age, but of course they already knew that Canelo would never fight him after savaging the Canelo name across the internet, pretty much exposing them had they any honor, which of course they do not.

Canelo and Golovkin have some favorable history together as sparring partners upon arriving in America to make their chops where the teenage Canelo actually had more pro experience. Anecdotal reports recall the teenager holding his own  as a welterweight in some lively spars, and now here he is all grown up in the greatest years of his prime as Golovkin enters his last prime years, so it’s a win/win for boxing if boxing can clean themselves up from the fetid mess they splattered themselves with a few weeks back with McGregor vs Mayweather. Yes, we have to hold our collective breath just to talk honestly about boxing these days as we scramble for our gas masks just to survive the outrages.

And, yupsir, that orchestrated hoax in advance took some of the wind out of the promotional sails of this fight. Canelo is still P4P #1 on boxrec while Golovkin is #4.

Golovkin, blessed with a naturally sunny disposition that belies his unceasing brutality as a fighter, is the expected favorite, the approximate odds 3 weeks out being Canelo +140 to Golovkin -160. I suspect the close odds reflect that he’s a slugger with all the attendant bias against sluggers who let their opponents go the distance as happened with Jacobs. Canelo is the money fighter in this donnybrook and could very well nab the decision in a corrupt jurisdiction as Vegas is whether deserving or not.

Forget the dubious scoring and prejudicial actions of the ref in Vegas.  For those wanting to actually enjoy boxing without being emotionally bound to a wager, it should rightfully be The Big Drama Show of a hotly contested ebb and flow of a classic that even the most pedestrian non-fan can savor. Who cares if one or the other wins the always dubious Academy Award by the end? If the combatants play out their roles as expected, we’ll have a fight to savor ’til the end of time. 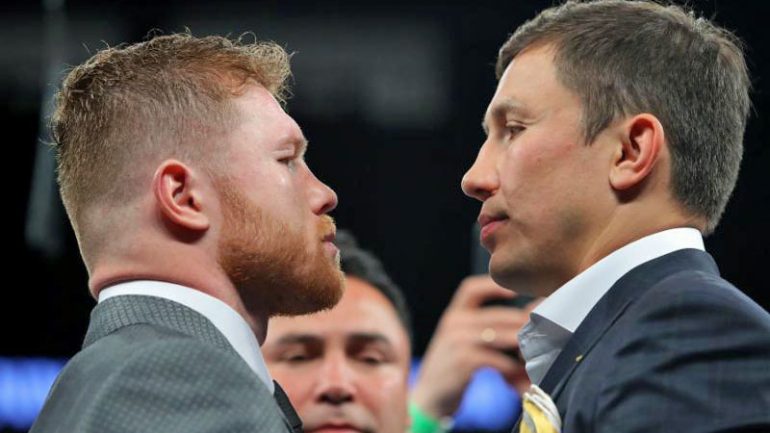