Terence Crawford in his full Welter debut will challenge the new Aussie WBO champ Jeff Horn for his title @ MGM Grand, Las Vegas, Nevada. That would be June 9th this Saturday. 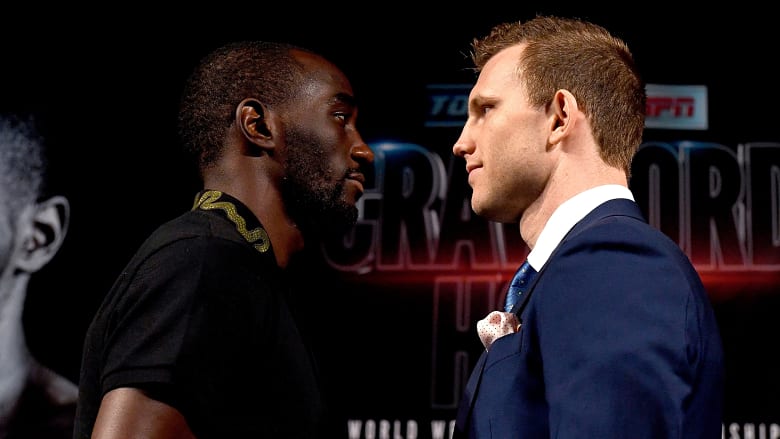 Horn in a unique position of being extraordinarily highly ranked by dint of an extraordinarily dubious decision over Manny Pacquiao in down under topsy turvy land of Oz, so now he takes on a top 5 Ring and Boxrec rated P4Per in Crawford. He’s a big strong, exceedingly awkward lad being trained in a unique “Broken Rhythm” style that traditional boxers have difficulty in solving. He’s a taught fighter in the mold of Gene Tunney who was not a natural fighter like a Dempsey or Louis who only needed grooming. He’s a school teacher for crimony’s sake made good and national Aussie hero, but here he lands in the Oasis of Officiating Oafery, that of  Vegas whose transgressions are legion in history.

Not that the exceedingly talented Crawford really needs such help. Horn looks much like a lamb led to slaughter with Bud having a completely different style from Pacquiao who quickly solved Horn and delivered a beating only to lose a laughable decision. When Horn looks to impose himself, Bud will be boxing and sharp shooting on the back foot as he assesses the bigger, stronger, fighter. It may be sooner, or it may be later, but I figure Bud to finish what Manny came within a split hair of finishing, a knock out of undefeated Horn.

Regardless of which fighter wins in this Omaha vs Oz confrontation, guaranteed the winner will supplant long time P4P #1 Canelo Alvarez on Boxrec, a win, win for his critics. Welcome to boxing 2018 style…only in boxing!