One thing great about the international expansion of top ranked contenders is that American heavyweights now have more opportunity overseas for bigger purses against higher rated contenders than they can currently find in the US, so enter the infamous “gong” promoter Ahmet Oner. He has set up, set up being a key idea here, he has set up his long suffering project,the Cuban Dancing Bear Odlanier Odlanier Solis, to fight his way back into the title picture against the 42 year old long time American contender Tony Thompson in Kusadasi, Turkey.

Yes, Virginia, there is such a place however remote and goofy the name may seem to Americans. It happens to be a beautiful resort area on the west coast looking out over the  Aegean Sea. The locale also has notable historical ties, such as  Mary the mother of Jesus having lived here in antiquity along with  St John the Evangelist for starters.

Thompson as much as any long time American heavyweight hopeful suffered somewhat coming up independent of the declining Don King heavyweight promotions. He fought mostly away from the glitter of Las Vegas and the glamour of New York in palookaville type of promotions. His first big splash was making it to the finals against Maurice Harris in the 2002 Thunderbox promotion by Cedric Kushner in Atlantic City. He lost that unofficial 3 round fight, yet managed to stay in the mix by fighting fringe contender types and the usual collection of journeymen.

His record became steady enough to make him an untouted mandatory challenger to Wlad Klitschko twice where he was knocked out both times, but he rebounded to land on his feet with a very busy 2013. Two big knockouts of touted British heavyweight giant David Price landed him in another eliminator against current Russian juggernaut Kubrat Pulev.

Thompson lost that fight which is how he landed the Solis fight. Oner needs his Cuban Dancing Bear to face fighters that have vulnerabilities that Oner can exploit in his canned promotions. Odlanier Solis was the heralded 2004 Olympic heavyweight gold medal winner who defected to the US some 8 years ago. At 33 years of age, technically he still has a few good years left, but there is nothing technical about the lard he has padded himself with and the soft opposition he has padded out his record with.

Solis did almost manage to complete one round of his sole title challenge as WBC mandatory to Vitali Klitschko before being clocked out, his highest touted achievement thus far to hear his fans rave about him, so where does he go from from there? Hows about a sumptuous holiday on the Aegean to await another anointment to the summit of boxing.

This scenario is becoming familiar territory for Thompson, that of traveling overseas to fight with all the cards and all the suits stacked against him. He knows he need a definitive knockout as he showed against David Price, something he could possibly achieve against the plodding Solis who tends to look like he’d much rather be dining as opposed to fighting whenever his opponent has a pulse. 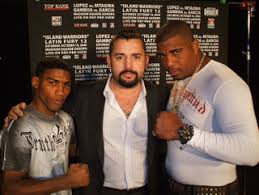 Sadly, it has become too easy to make sport of the tubby Solis, but he is the big money star for this hometown style promotion of the Turkish born Oner against Thompson who was brought in to lose, probably with Oner devised shennanigans hampering him every step of the way.

Tony Thompson has the tall, tricky, southpaw style, heft, and experience that has pretty much seen it all and done it all, so we shall see what ultimately transpires in the Oner designed Solis Turkey Zone.