Abner Mares defends his IBF banty title in the rematch against Joseph Agbeko December 3rd at the Honda Center in Anaheim, California.

The fighters are about as evenly matched as a good matchmaker could dream for with the only edge going to the dirty fighting of Mares, turning it something of a promoter’s nightmare if Mares remains true to form. Will the referee allow a 3rd straight dirty fight by Mares after he eked out wins over Vic Darchinyan and Agbeko previously with low blows, punches after the bell and other rabbit tricks that used to be known as the Dark Arts of boxing?

Fighters used to be more circumspect and less obvious in practicing the Dark Arts, but to be fair, fighters only use what they can get away with, and regrettably the Showtime supermiddle and banty tourneys have been full of dubious refereeing. The supermiddle finale is allegedly due early next year in what could be a dirty way to start the new year.

Incidential fouls are to be expected in a high action bout when punches start to flow in bunches, so let’s hope the ref does his job properly this time around to sort out what could be a very lively bout between two game and skilled practitioners of the sweet science.

The “undercard” is  a main event unto itself.

The longtime undersung former WBA banty champ Anselmo Moreno defends his new superbanty WBA title against the raging Vic Darchinyan who has to be the toughest little man in boxing today. Yes, the former flyweight titlest continues to plow up new divisions and is making his superbanty debut.

Moreno is 31-1-1 with 11KOs against some pretty fair competition. Darchinyan is 37-3-1 with 27 KOs against the best competition of his era, so by records looks to have the edge going into the fight with more power against better class. 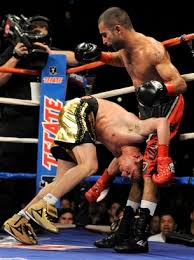 The Harder They Fall

Normally a fight between two southpaws makes for an awkward, difficult fight to watch and judge, but both fighters are offensively oriented with contrasting styles and attributes, meaning a good fight is in the cards.

Darchinyan can be said to be the slugger even if his power has not kept up with his rise through the divisions. He’s 35 years old, ancient in the little man world of boxing, and will be giving up a lot of height and reach to the rangy 5-8 Moreno who is a prime 26 years old.

Moreno has a good jab and credible defense to go along with his two handed attack. Darchinyan has his trademark crouching lobster style with the right hand mostly used as a distraction and defensive purpose to disguise his big left hand where the power is.

Each fighter made his chops early on in the flyweight division and now they finally meet in the Panamanian Moreno’s American debut. They are very durable fighters, so this is likely a 12 round decision in the making.

Could be a classic card of some really great banty fights if, and only if the referees show as much class as the fighters. We shall see.

This is a bit of a novelty bout in that normally we don’t see EBU champs abandon lucrative title defenses to fly over the pond to challenge a red hot Mexican contender, but truth is that Magic Hatton has won all 6 of his fights in the US and should in theory feel relatively comfortable fighting a fighter looking like just another Irish fighter in Alvarez.

The comfort level won’t last long after the first bell chimes in since the 20 yr old Alvarez is in reality already near legendary in Mexico and hopefully wrangling his promoter, Golden Boy, to make this his breakout year. Hatton has also pressured his promoter into making this his biggest year, and his promoter is none other than acclaimed older brother, Ricky Hitman Hatton, who has strong Golden Boy ties which is the impetus for this classic confrontation.

The breaking news going in is that Golden Boy petitioned the WBC to make this a vacant WBC junior middleweight title fight since Alvarez is the #1 mandatory and “Silverbelt” holder.

The previous title holder was Manny Pacquiao who relinquished the belt shortly after winning it in his last fight against Antonio Margarito.

Magic Hatton is at a traditional athletic peak at age 29, and has a bit more ring experience, 299 ring rounds at 41-4-2, 17 KO to Canelo’s 213 rounds at 35-0-1, 26 KO, but experience seem to be his only advantage going into this bout. They are otherwise about the same size and strength with Canelo having a speed and power advantage and harder overall competition coming up the rankings compared to Hatton who has stepped up his competition recently to get to this point.

A significant common denominator is Lovemore N’dou whom Hatton struggled to a draw against whereas Alvarez laid a technical thrashing on him.

I’m thinking Alvarez is the big betting favorite here. Hatton is a strangely awkward fighter for being so technically oriented, but the few times I’ve seen him he always looks off balance and off his timing to start a bout. While his chin has proven solid at the Euro level, Alvarez is a grade above and could take him out early before Hatton warms and adjusts to the fight.

Many regard this as a mismatch with Magic Hatton being long derided as a joke because he never lived up to Ricky’s achievements, but few fighters ever do. Persistence pays dividends though since Magic Hatton has proven to be a solid fighter in his own right and seems to have finally won over the respect of the British boxing public. It helps that brother Ricky is no longer in fighting trim these days, preferring the role of promoter and thus relieving Matthew of the immediate comparisons.

Bottom line is that many in boxing see so much more untapped potential in Alvarez than they do Hatton, and doubtless that should be the case come fight night. More importantly, win, lose, or draw, both fighters will have increased their international exposure which is a win/win scenario for Golden Boy in what could be an entertaining bout if it manages to go more than a few rounds.

Young Canelo has a mean and hungry old school look about him this time out, so what say you tune in for the first hand results?