Alvarez has fallen into the Montreal vacuum of boxing after his natural rival, Adonis Stevenson, avoided most every fight against legit contenders during his WBC run with the belt, a shameful stain on Canadian boxing and the WBC not to mention Stevenson himself, but of course this former pimp has proven throughout his career to be utterly shameless. The good news though is with Montreal being so close to Atlantic City, this fight has a feel of an easy regional commute with plenty of Alvarez’s Montreal fans showing up.

Have to figure Alvarez will be over matched here, but Kovalev is moving up in age, 35, and at least partially if not fully self trained these days though supposedly he hired a staff for this fight. Regardless, they still have to fight in the ring to prove their current mettle as boxing kicks the can down the road as they try to rebuild from their self created travesties marking a long decline in the public interest of boxing in spite of the general gameness of the fighters.

Enough already, let’s get it on!

Here’s a Shout for Carl Froch vs Glen Johnson

Another leg of the forgotten Super Six Supermiddleweight tourney takes place on June 4th this Saturday at Boardwalk Hall in Atlantic City when the Old Road Warrior, Glen Johnson challenges Carl Froch for his WBC belt and the right to advance to the finals of the tourney.

This should be a cracker of a fight as the Brits are fond of saying, but alas, is anyone else interested outside the usual boxing fanatics? Hopefully there’s enough boxing fans still left on the East Coast to fill the venue in order to honor the fighting credentials of these gentlemen who are loathe to take a step backwards in the ring and willing to take on all comers, a rarity in boxing these days among the plethora of spoiled belt holders.

In his last outing Froch put on his finest boxing demonstration ever in handling the frustrating style and power of Arthur Abraham. Johnson proved there’s still thunder in those ancient mitts as he knocked out Alan Green who had never been stopped before.

Incredibly, this is 42 yr old Johnson’s 18th year in boxing, and while he has slowed up some physically as to be expected, he is still one of the all time toughest fighters in history and nobody fancies a walk in the park with him unless they are forced to. No surprise that Johnson has logged well over double the fights and rounds of Froch who has become quite experienced in the last few years at the elite level of his division.

Since both are coming off previous performances that were out of character for each fighter, that makes this fight something of a wildcard where anything might happen. Johnson is a pure pressure fighter and Froch thrives at ring center against come forward fighters so there is sure to be plenty of give and take in this donnybrook. 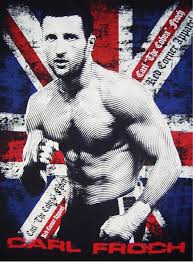 Does Froch have the power to keep Johnson off of him in order to pick him off? Can Johnson get inside to outwork and outbrawl Froch?

I must confess to loving the career of the old Road Warrior, but probably he needs a big knockout to win this fight, and of course Froch has proven to be very durable, so my fear is that Froch’s power may trump Johnson by the fight’s end.

Froch will enter a substantial favorite, but he best be running on all cylinders as this will take a huge effort to derail Johnson who is probably as hungry a fighter today as he was 15 yrs ago.

Time for a Big Shout to rattle the cages of fight fans down Jersey way. Everyone always moans about returning to some golden era of old school fighters, and now two of the best modern throwbacks to any golden era in history are gonna duke it out in your backyards, so, gentlemen, “Let‘s git it on!”