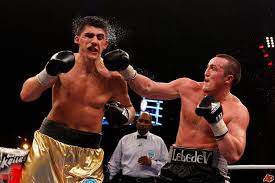 It goes without saying the little known Boswell was brought in to lose, so he best bring his big punch because he is not likely to outwork the busy Povetkin who at least has a work ethic going for him. 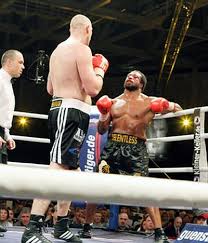 The serious heavyweight action takes place when the Finnish Nordic Nightmare Robert Helenius has a homecoming against Dereck Chisora who recently was well lumped by young heavyweight phenom Tyson Fury.

Helenius has been on a tear everytime he steps up in class, but to be fair, Chisora lacks the credentials of previous champs Helenius has knocked out. Chisora is a young, strong, tough fighter who was on a rampage in Britain until Fury derailed him and did briefly hold the British Commonwealth title. He also broke into the Boxrec top 10, so in his comeback he could prove to be a tougher fighter this time around. 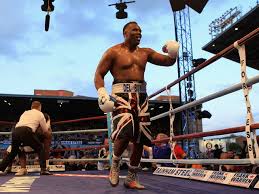 Del Boy in his pomp

This vacant EBU title challenge could be quite entertaining since both are big, strong, prime heavies who come to fight with some big punches, but only if Chisora can step up his game from his Fury effort. He was doughy looking and overweight, sometimes a by product of fighters looking for extra mass when they go against giants such as Fury or Vitali Klitschko. More to the point, he was clumsy without a gameplan other than landing the big punch.

Helenius is on an undefeated upswing and should be the big favorite with the oddsmakers. Chisora has seen his star plummet after the Fury loss, but therein lays his hope. Sometimes a fighter in his big homecoming against fighters they are supposed to beat can get caught up in all the hoopla of “The Magnificance of Me” and lose their focus by the time of the first the bell.

The Chisora style is that of a straight ahead puncher, and in boxing, one good punch could mean a huge payday in his next fight, so this is his puncher’s chance. Helenius can be a slow starter as he dials in his timing and punch placement, but for a big man he has shown some bruising, eyecatching combinations when he gets going for impressive stoppages.

Is this copromotion a preview with the winner getting a crack at the WBA “regular” title currently held by Povetkin? That would likely be Helenius who is signed to the same promoter, Sauerland Events.