Posted on February 7, 2011 | Leave a comment
Where’s Waldo was a popular ’80s children’s book where readers got to look for the cartoon character Waldo in crowds. 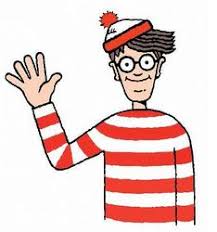 Fast forward to the ’10s with all the football bowl games and superbowl settled, and it’s deep into winter wonderland in the boxing world with little scheduled, so enter one David Nino Rodriguez announcing a “comeback” of sorts to save the heavyweight division that you can read here:

Can you spot him next to Waldo?

David Rodriguez is currently 33 yrs of age, 33-0, 31 KO, last seen on the undercard of the Erik Morales comeback against Jose Alfaro in Mexico, so what’s he coming back from, Mexico?

It ain’t like he wouldn’t stand out in a crowd, being a prime, tall, big, strong, handsome guy, but with his current Boxrec ranking of 141, damn, he’s hard to spot between Henry Fuentes and Maurice Byarm after 12 years of boxing.

What? Impossible you say, right? How could that happen?

Reminds me a bit of America’s last boxing Olympic medalist Deontay Wilder whom you can read about here:

In spite of Deontay fighting inferior opposition to Rodriguez, they passed each other in Boxrec rankings sometime last year with Deontay currently sporting a shiny 103 ranking thanks in a large part to a 33 sec KO of Ty Cobb, “Nino’s” scheduled opponent this coming Saturday.

Is it Ty Cobb now that America’s next Heavyweight has to pass through? What, does that mean we are we to be blessed with a showdown between Nino and The Bronze Bomber? Would it be in Mexico or Alabama?

Do these guys really want to fight? Or do they want to pose as fighters in Mexico and Alabama while ignore all the stupendously silly money and acclaim ready to be minted for America’s next heavyweight champion?

Can’t speak to the sentiments of their fighting hearts, but it ain’t a stretch to think there must be millions, no make that billions in the world who would love to have their size and physiques who might make better use of their obvious opportunity, yet were not so blessed.

So, like trying to find Waldo, boxing fans have to scan a mighty large crowd to spot America’s next “Heavyweight.” It didn’t used to be like that.