Saul Alvarez, 48-1-1, 34 KO, and Julio Cesar Chavez Jr, 50-2-1, 32 KO, currently two of Mexico’s most popular active boxers, square off on Cinco de Mayo weekend, Saturday, May 6, @ T-Mobile Arena, Las Vegas, Nevada in what is being hyped as the biggest all Mexican fight ever. Perhaps, but it also may well be the biggest fight this year as far as the financials goes though the Wladimir Klitschko/Anthony Joshua fight may surpass it or not. Regardless these two biggest fights of the year happen back to back weekends for a thrilling run for boxing.

Canelo has taken a lot of stick from fans for the delay of the Gennady Golovkin bout, but blame Richard Schaefer and Al Haymon for illegally gutting Golden Boy Promotions that have completely upended boxing that resulted in hundred million dollar lawsuits. Then we have All Star Boxing winning a rather dubious $8.5 million judgement they against Canelo in spite of having no contract with him…only in boxing and only in Floriduh could this happen.

So of course Canelo has had to follow the richest prize money against Amir Khan and Junior. Golovkin, in spite of his vastly superior boxing credentials, brings an inferior purse after the down year of 2016 that saw boxing in America it the lowest financial point in in the last 35 years regarding general public interest. Assuming Canelo prevails against Junior, the Golovkin fight will be twice as big as this time as compared to last year and primed for this September. White gloved, snooty, connoisseur snifting boxing purists may not like it, but Canelo has been giving the fans what they want the bulk of his career which is why he has been so financially successful save for the big civil judgement against him. All Star have filed a lien in advance to garnish that $8.5 million judgement on Canelo’s purse for this fight, a huge bite of cash for a really big OUCH!

Before the fight was announced: Best Buds

As to Junior, he’s taken well deserved stick for his lack of dedication, but make no mistake, this kid has a dangerous punch to him as future HOFer Sergio Martinez found out. His post fight career was utterly ruined when he was only barely to crawl out a survivor against Junior, and then Andy Lee KTFU.

After the fight was announced: Grrrrr 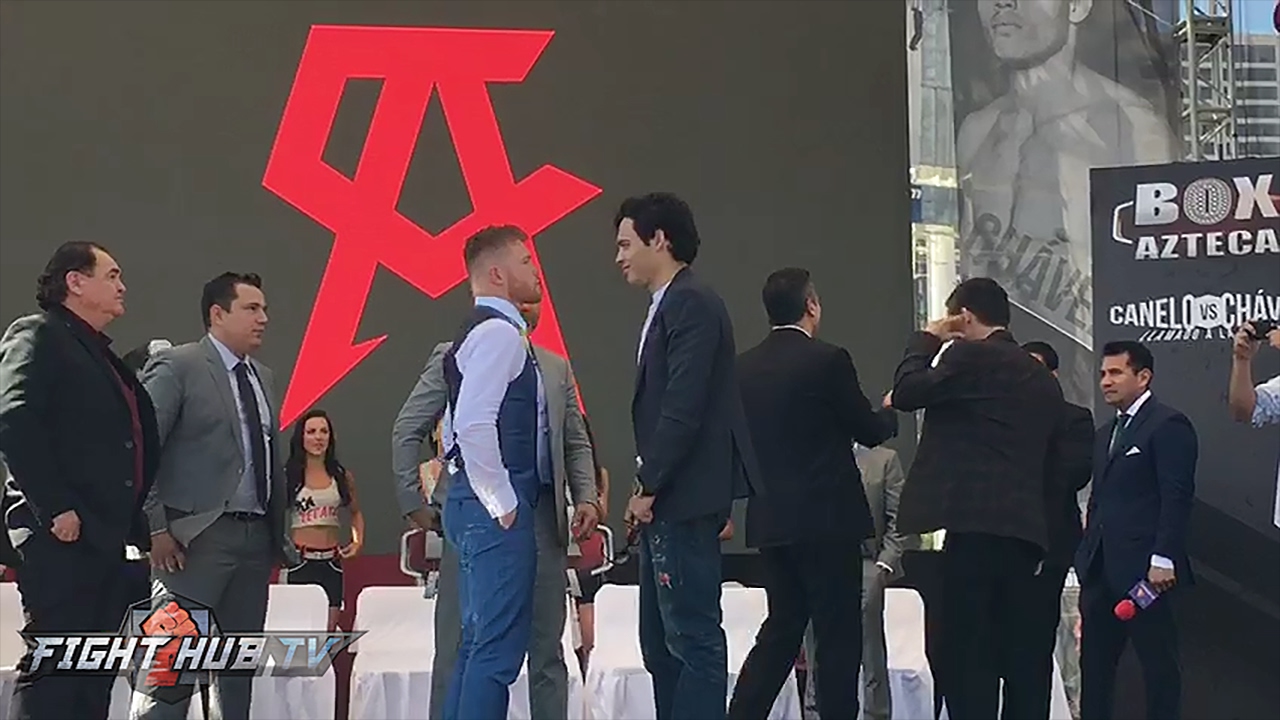 With this being an all Mexican superfight, the super special, superduper, WBC championship belt for the Mexican Champion of the World will be on the line. Three designs were presented to voted on with the participation of thousands of fans around the world, but primarily Mexicans fans that will decide the winning design, or at least that was the promise by WBC El Presidente Gordo Para la Vida Sulaimán. The “Winning” belt was obviously a complete redesign of the three…only in boxing in the WBC!

All the belts were designed by native Mexican Huicholes Indians. Here were the contenders.

The All Mex WBC Belt

Word is that Canelo has made a special point to reject the belt that I assume involves WBC sanctioning fees in the hundreds of thousands of dollars. Money and pride is quite enough for Canelo who has indicated a disparagement of the WBC after some heavy handed demands they made upon his career. I suspect amends will be made before the fight since Canelo would otherwise be proud to accept such an outstanding design of his native countrymen.

The Network Numbers, the real bottom line in boxing these days:

The HBO replay of the Canelo-Liam Smith fight drew 459,000 HBO subscribers, but in perhaps in spite of the 50,000 fans that packed Cowboy stadium, the PPV sales appear approximately 300,000. However, it is also supposed the Smith fight was seen by 18 million viewers in Mexico on free television via Azteca 7. Notably, Alvarez’s fight this past May versus Amir Khan drew around 600,000 PPVs and 767,000 HBO subscribers on the replay. His Miguel Cotto fight drew 900,000 PPVs and the replay 901,000 HBO subscribers. Junior may prove to be bigger than all three combined, so we shall see.

Junior has hired legendary Juan Manuel Marquez boxing trainer Ignacio Beristain for this fight, and perhaps most tellingly the notorious Marquez BALCO PED pusher, Memo Heredia, as his physical trainer. Junior was slapped with a minor drug violation of using illegal diuretics to drop weight in the past plus one marijuana violation that cost him $900,000 in a clear daylight robbery by the Vegas commish, so it is quite sad and telling that Junior is resorting to these dubious means at this juncture. It becomes scary to contemplate what Junior could do pumped up on Memo Heredia’s PEDs.

As a preview to this Mexican  family guerra  in Mexico, Canelo older brother “Inocente” Ramon Alvarez was knocked out in the 2nd round by Junior’s younger brother “The Businessman” Omar Chavez to even up that series 1-1, so the Alvarez and Chavez family already have some history of competition. My question would be if Meme Heredia also works with Omar in a family affair?

Lest the 164.5 lb catchweight be a problem for Junior, here he is after hard training for 2 months in the mountains of Mexico a month before this fight, doubtless in the best condition of his somewhat wasted career as to his unfulfilled potential. Here he is probably near the lightheavy limit of 174 lbs looking ready to fight with fire in his eyes at that weight again. All he has to do is lose a gallon of water, and presto, he’s made the 164.5 catchweight with 36 hours to rehydrate and replenish to a probable 190+. Many construction workers deal with similar losses most every day working outside during the summer months.

Add in that Canelo likely to be at 180+ lbs come fight night, really this is what used to be an ol’ fashioned heavyweight fight. Canelo’s fabled El Gancho Izquierda should prove the difference. However long it lasts, it promises to be HOTLY contested in a WAR strategically waged by Canelo and emotionally waged by Junior, but only after Lupe Contreras asks them, “Quien is mas macho?”