Wladimir Klitschko defends his plethora of belts against Tyson Fury, Saturday, Oct. 24 in ESPRIT arena, Düsseldorf, Nordrhein-Westfalen, Germany. Finally, the big lunk Fury gets his chance after being a mandatory for a few years to no avail. He’s in his 4th year of the rankings in Ring, yet by circumstances beyond his control, some showy, big money fights fell out on him, so he ended up shunted aside as all his preparations and financial expectations fell upon barren, rocky grounds.

Yet another one of those odd circumstances took a bite out of Fury again after an injured tendon in the tender Wlad calf muscle set the fight back a month. That recalls for me an interesting parallel to George Foreman’s sparring gash by an elbow while training for the Ali fight in Zaire that set that fight back about 5 weeks. In honor of the potential of this fight, I filed a rehash of that fight where boxing routines normally followed in America got turned on their heads in Zaire. Link:

There is no doubt this will be one of the biggest Wlad fights, perhaps his biggest ever if the fight really takes off in the ring. The 27 year old Fury attracts a highly virulent crowd of both his detractors, and his fans, drawn by his high action fights allayed with his big, brash, Irish Traveler braggadocio, but he’s got a huge task in dethroning a juggernaut like a Klitschko much like Ali had against Foreman. Wlad has beaten 7 undefeated heavies in title bouts and going for his Henry the 8th against the undefeated Fury, currently at 24-0, 18 KO. Additionally, if the switch hitting Fury decides to go all lefty or switch stances repeatedly as he sometimes does, Wlad could notch his 9th title fight against lefties, way more than any previous heavyweight champ and likely more than any champion in any weight class. Wlad has been literally fighting at the emergence of a new era of heavyweight boxing where lefties in all divisions have been making incredible history. The really big men of today have also been able to better leverage their size and strength advantages thanks to 12 round title limits and new scoring rules that give extra credit to knockdowns. Very few “200-215” lb heavies exist anymore at the higher end of the spectrum because so few are able to survive the career fight to fight to fight gauntlet of big men to get to the top.

Warning: The as yet unwritten drama for this final script is currently being conjured up by the capricious Fates just as worldwide boxing respect is being reached for Wlad. He has started breaking heavyweight records held by legendary Joe Louis, yet he has not looked so stellar his last two fights. Sure, he brutally knocked out Kubrat Pulev, but took at least a couple dozen or more rabbit shots in the clinches, a poor defensive effort that could have telling repercussions down the road, like maybe against Fury. Moreover a torn left bicep postponed that fight, so when he finally did enter the ring, his bicep looked strangely sick, twisted, and contorted compared to his previous healthy state, so maybe Father Time has started to extract his cut from the 39 year old Wlad now. It also took him a while to get untracked against the speedy defensive style that Bryant Jennings unveiled, in short, surprise, surprise, the old man bones may be taking longer to warm into a fight.

Then there is the dilemma of his wife’s postpartum depression after giving birth to their child. Married family life sometimes becomes highly distracting at critical times in life. Is this one of those times?

Though Tyson Fury is much derided by the public, perhaps justly given his brazen,  inflammatory diatribes and his physical tendency towards flabbiness, make no mistake, this is one of the purest fighters today, and he can box as good as he wants when needed. He can fight inside or outside, lefty or righty or switch as he sees fit, punch in dynamic combinations or brawl and maul. At 6-9, you can bet he has underrated power and strength that seemingly flows without any noticeable effort. Even as a youngster he had good stamina, fast hands, and quick feet for such a towering fighter, a very relaxed fighter in the ring. He’s in his element and it shows since only John McDermot when he was barely a 21 year old novice has ever been able to extend him. He’s biggest mistakes have been defensively since he loves to put on a show, so very aggressively comes forward without a care as to the consequences. Anti-social media monkeys love to ride him about his glass jaw after being knocked down a couple of times, but Joe Louis used to get dropped a fair amount also. Ali was dropped hard early in his career by 190 lb fellow prospect Sonny Banks, and then really hard by the 175 lb much beloved Brit, Henry Cooper, a fight so controversial that it’s still being contested to this very day some 52 years later, so at least Fury’s in good company in being defensively lax at times, but only for now as his prime career is starting into full swing. His critics are near in a frenzy as they pray for a major slip up for them to savage.

“I think he’s bipolar and not really knowing what he’s doing next. He doesn’t’ really have a plan. I’ve been observing him the past few weeks, and I’ve seen him with his behavior and how he acts. There are some major issues.”

Cassius Kugan interview with Tyson’s pop, the notorious John Fury at his caravan, a real cracker of Irish Traveler culture and promotion this one. 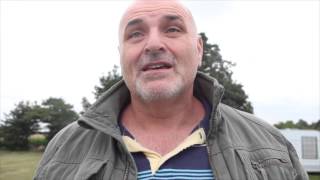 As to how this fight plays out, Fury’s trainer, his uncle Peter is very savvy and likely also noticed Wlad’s slow starts, so why not drop a blizzard on him from the opening bell and see how he handles it. Obviously Fury has to be more disciplined than in his previous fun and games outings, and if it doesn’t work, Fury can just back off the pace and box at range to keep the old man running through his paces. Pulev was too macho for his own good, and Jennings too small and too light hitting to really make any inroads on Wlad, but Fury has the natural attributes to put it to Wlad like nobody has been able to do in ages, especially after heaping plenty of Irish blarney to get under Wlad’s skin in the prefight buildup.

One exceedingly notable exception to this fight would be very exceptional indeed when Cecilia Braekhus defends her titles against Ramona Kuehne on the undercard. I won’t watch women’s boxing, never have and never will, but these two would be worth going out on a long run with for the testosterone boost alone not to mention the titillation factor…WOW!

Alas, it appears the rescheduling has knocked Ms Ramona off the card, instead being replaced by a certain Ornella Domini. Sounds like The Fates got a mite jealous over that beauty contest.

Naturally I still strongly favor Wlad since Fury’s mental discipline has yet to be tested at this, the highest level he’ll likely ever fight at. Be interesting to see how they adapt to each other as I don’t think Wlad will be able to tie up Fury so much as he does other fighters. Be cool also if this turned into fight of the year. True, boxing’s biggest fights this year have turned out to be actionless duds, but, hey, we can dream can’t we?

Sizing Each Other Up