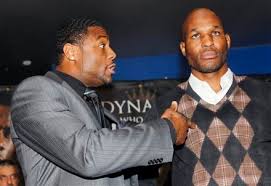 ~Not much boxing going on during the Christmas holidays and New Years party preparations, but the weekend after the New Year sees a very interesting crossroads type of bout when the seasoned WBO lightheavy champion, Juergan Braehmer, goes against the emerging WBA champion, Beibut Shumenov.

Unfortunately, the bout takes place a bit off the radar at the Ice Mansion at Chimkent, Kazakhstan, Shumenov’s home country, so finding an outlet to view the fight may be a problem, but the fight has the potential to be a classic battle.

The 32 yr old Braehmer has something of a grizzled look about him from turning pro after a storied amateur career in 1999 and currently sports a 36-2, 29 KO record. He was promoted as a “Hundred Year Talent,” but unfortunately has taken the Mike Tyson approach to his talent, being in numerous well documented scrapes with the law, one requiring a 3 year hiatus in prison, so his career sorta spits and jerks along in between his legal headaches. His latest is an assault scrape that could see him behind bars yet again.

The 27 yr old Shumenov is also a prodigious talent, having won his WBA belt in his 10th bout with a series against the rugged Gabriel Campillo, but in contrast to the reprobate Braehmer, he is ambitiously expanding his interests with his own promotional company with plans for a robust future after he hangs up the gloves. Thus we may possibly look forward to a wave of talent coming out of Kazakhstan.

If Shumenov looks like a kid compared to Braehmer, it might be the spare 71 professional rounds that he has logged compared to the 172 rounds for Braehmer, but this kid can fight and he’s game to the core. It helps his lack of experience that he’s been in against tougher competition than Braehmer has of late, so everything looks prime for a really great battle between skilled boxers who don’t mind mixing in some brawling.

The beauty of this fight a contrast in styles with the lefty Braehmer utilizing a more upright European style whereas the righty Shumenov fights in a more flowing freestyle manner, melding athletic footwork  and body angles with a myriad punch selection. Since neither has realized the full flower of his talent, it follows that perhaps one or both will produce something beyond his previous boxing capacity which is where fights start to become compelling classics.

They are both 5-1 in their last 6 bouts with the major difference being Shumenov only notching a single knockout whereas Braehmer has 4 knockouts, the power differential perhaps being another key to offset the home advantage Shumenov has.

I have to think the experienced Braehmer will be the oddsmakers’ favorite, but probably not by much.

Hard to predict how a fight like this plays out with each being the best the other has ever faced, but it should be a good, game fight with a lot of ebb and flow as both have their say, probably a war of attrition with one eventually falling out or both barely scraping to a disputed finish.

December 8th, check it out~