Not sure what Le Tombeur represents, but Lucian Bute is about as talented a southpaw boxer as you will find in the history of boxing, and at age 31 seems to be in the middle of his formidable prime.

There was much speculation as to why he was left out of the Showtime Super Six tourney, but it turned to be a blessing in disguise. The tourney has been poorly officiated with plenty of fighter hijinks in and out of the ring as postponements continue t0 mount. All the while Lucian Bute has been quietly minting Canadian dollars as the hometown hero and now he is perfectly poised for the 9th IBF defense of his supermiddle title.

Ol’ man Johnson is coming off an emergency replacement stint for the Showtime tourney where he gave a good account of himself, exactly what his growing legion of admirers have come to expect from the toughest fighter of his era. Yes sir, Glencoffe Johnson has been on a roll of sorts since 1999, not by his record, a mixed bag at 15-12-2, but by taking on the toughest schedule in boxing with almost every one of those fighters being Ring ranked if not also #1 and P4P ranked to boot. 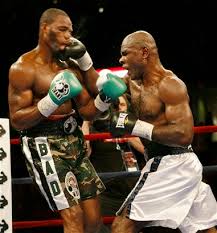 He does most all of it on the road while giving up most of the other ring conditions as well, so here he is again just 5 months after a brutal bout against one of the premiere sluggers of this era preparing to tangle with Boxrec #1 supermiddle and hometown favorite, Lucian Bute.

How does he do it?

Older fighters often like to play with the old school card, but The Road Warrior is the genuine article and a modest man, so there’s never been a need for him to play it. A concern is that he will be 43 yrs old at the start of next year, and even the toughest man has to call it a day at some point. He did make British slugger Carl Froch work hard every minute of every round in a competitive effort, but Bute is a much trickier, much faster proposition entirely.

There is some hope in those war weary bones though. Even as Father Time is trying to chase him down, it turns out that Glen Johnson will be the toughest, most experienced and the best fighter Bute will have ever faced.

Johnson may be a bit slower than the fighter that ran over Roy Jones Jr, but he still applies relentless pressure no matter if he is winning or losing a boxing match, the kind of pressure that can cause an untested fighter to come unglued.

Bute has been to the well and back against Librado Andrade in a classic fight series, and he’s been on his own roll of 6 straight knockouts over a pretty fair collection of contenders, so this confrontation looks to be a heartstopper on paper since both are fan favorites and one will have to lose.

Saturday, Nov 5 at Pepsi Coliseum in Quebec City for those who are interested in boxing history in the making.