Something to Prove–Andre Berto vs Victor Ortiz

While Berto looks the part of a skilled operator, truth be told his career has been carefully orchestrated against a series of some of the softest touches in boxing considering the reputation the WBC belts holds in some circles. The only legitimate Ring ranked welter contender he has faced, the light hitting Luis Collazo, knocked him down hard and gave him more than he ever wanted to see in the ring again.

It’s an odd career for the man who won Floyd Mayweather Jr’s title back in 2008 against the unheralded and never heard from again Miguel Angel Rodriguez. I guess some credit goes to beating former titlest Carlos Quintana, but Quintana has never been up in the contender class again after the montrous Paul Williams knocked him cold in the 1st round back in 2008. And Berto did outpoint Juan Urango, the IBF jr welter titlest, so maybe I’m being a tad harsh, but this is one of the deepest welter divisions in ages and Berto has been largely missing in action, so maybe I’m on target. 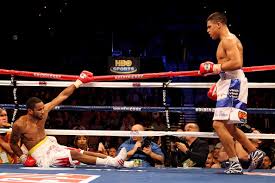 Vicious Victor Ortiz just turned 24 and has already been in against stiffer competition overall, and now looks to jump a division for opportunity. The positives about Ortiz are that he is a more skilled, versatile boxer with some killer power, the likes of which Berto has never tasted. The negatives go back to his fight of the year type of bout against Marcos Maidana that saw them trade some hard, highlight quality knockdowns, only to see Ortiz quit on his feet after the last one, earning him the derision of armchair fans and hardened boxing people.

We now know that Maidana was very underrated and has that kind of bone shattering power that causes fighters to question their health once they taste it. I can’t say what was in the kid’s heart that night after having his wiring scrambled by Maidana, but that he continued his career with great success against high caliber oposition tells me he’s still in the game to win and make a difference.

The last time out, Ortiz got a most unfortunate majority draw against Lamont Peterson, a bout I thought he won hands down with his slugging, one knockdown, and comprehensive boxing, but truth be told, the critics savaged him for backing off going for the KO, choosing the more careful route of boxing.

So we have two talented fighters with some serious question marks about their true status as top fighters which leads me to think both will be trying to prove something to the public which usually translates to at least a pretty good fight if not a great fight.