Attacker of Trainer James Ali Bashir Gets Slap On The Wrist

James Ali Bashir was a longtime trainer and former student of HOfer Emanuel Steward when he was attacked(sucker punched from behind) last October at the weighin of his fighter for a match being held in Flint, Michigan.

The reprobate’s name is Artis Mack who happens the brother of female fighter Claressa Shields acting as a member of her team on stage no matter his official capacity. The elderly Bashir, now unconscious, slammed face first to the floor and had to be rushed to the local hospital with severe facial injuries and bleeding on the brain, and then readmitted, potentially a death knoll if not severely disabled for life.

Like all cowards, Mack fled the scene of his crime, but was tracked down and finally adjudicated with a plea deal by Michigan authorities. The sentencing of misdemeanor aggravated assault is supposed to take place on March 10th with a maximum punishment of up to one year in jail and/or a $1,000 fine, or both, or sadly, more probably less.

Bashir attorney Brent Leder told ESPN he and his client were not happy with the plea deal.

“On behalf of Mr. Bashir, to say that he is shocked at the leniency shown to Artis Mack is an understatement,” Leder said. “Mr. Bashir suffered serious injuries and is still dealing with ongoing trauma from the assault by Artis Mack. A 28-year-old violent criminal, who had no business being a representative of Claressa Shields at this event, attacked a man 40 years his senior. There is no excuse for those actions. Mr. Bashir is appalled at the prosecutor’s office [for] offering a plea deal without even bothering to conduct a preliminary examination where Mr. Bashir would have had an opportunity to put his testimony on the record.”

* Though James’ attorney is suing every entity associated with Shields’ promotions, I seriously doubt they can squeeze much out of those sycophants. Bashir’s hospital bills most certainly run into $100s of thousands if not well over the million dollar mark, and then there is rehabilitation to be calculated, so where on God’s green earth is JUSTICE in James’ homeland?

The de-evolution of modern day America into 3rd world thuggery and injustice…only in America these days.

Flash back 8 years ago and few of Boxing‘s cognescenti and broadcasting wunderkinds would have been predicting the dominant title reign of Wlad Klitschko, but my how the landscape has changed. He’s even been mooted for IBHOF entry by some, but of course a few certain others who need no identification have been publicly picking against him for the duration.

Well, there’s no accounting for their public affinity for self flagellation, but the masochists have a new white knight in shining armour to make their wildest dreams come true when, or rather IF Mr. David Haye takes the long walk to the ring to toe it up against the Ring/IBF/WBO/IBO champ who already beat up the geniune undefeated WBA champ, Ruslan Chagaev some two years ago.

I say IF only because Mr. Haye has delivered a series of soft level WBA fights after announcing he would move to the heavy division and clean it up in between walking out on several Klitschko fights. The beleaguered British public failed to read the fine print that it was actually the WBA heavyweight division where he would be taking out the rubbish, so they made Mr. Haye something of a reality media star. By natural progression of their modern reality world, they figure this fracas is to be Mr. Haye’s coronation into King David, so they will be flocking to tune in come what may of the result. 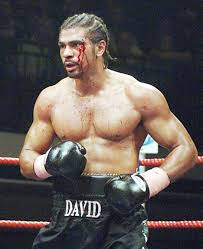 At one time Mr. Haye was actually a blood and guts action warrior who briefly held the cruiserweight titles, but that seems ages ago. As a heavyweight contender, he has followed the three ring circus approach much in the way of Odlanier Solis who was demolished in the first round by brother Vitali last March.

I imagine Mr. Haye’s brain trust looked at that fight and plan to break out his fleet footed strategy that takes him into later rounds where presumably he will have a better feel for having his face jabbed into mincemeat.

I will be more than happy to give Mr. Haye due credit if he upsets the big favorite, but given the farcical nature of his heavyweight career with his general disrespect of fans and boxing, Mr. Haye has earned a level of disrespect that cannot easily be dismissed. 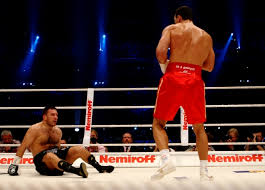 The easy prediction is Wlad notches his 50th knockout in a walkover . His trainer, Manny Steward has been predicting all these great things Wlad is going to do, but he’s a very cautious technician who prefers to set his own tempo, so I look for a late KO as he carefully walks down Mr. Haye much like he did Eddie Chambers.

If Mr. Haye wants to come straight at Wlad early, that would be thrilling for fans, but Wlad made easy work of the previous WBA champ, Ruslan Chagaev, and similar results are expected against their newest WBA hopeful, Mr. Haye.

Objectivity deserves a better place in boxing though, so Mr. Haye either has to produce a dynamic performance well above his previous efforts, not likely at this stage of his career, or Wlad has to revert back to the form of one of his 3 losses.

Could Mr. Haye leverage one of those off performances?

The best and most comprehensive win over Wlad was when the tricky fast handed South African southpaw Corrie Sanders put him down 5x for the TKO stoppage, but what is forgotten in that fight was the unintentional headbutt to Wlad before the first punch landed.

The strangest loss was to Lamon Brewster who absorbed a ferocious beat down and survived two knockdowns when Wlad mysteriously ran out of steam and collapsed after the bell ended the 5th round. Oddsmakers suspended betting on that fight days before because of a mysterious surge for Brewster who scarcely landed a punch on Wlad.

Wlad’s first ever loss was to big journeyman, Ross Puritty, who also absorbed a beatdown for the ages through 11 rds, a fight he could’ve been stopped for being noncompetitive. He surprised the tiring 22 year old Wlad with a sudden attack good enough that Wlad’s trainers threw in the towel.

This is Wlad’s 59th pro fight and a fighter only has so many bullets to fire, so even Clint Eastwood had to ask the punk, “Are you feeling lucky today?

The Tyson Fury Show At Crossroads

The Tyson Fury Show has been a hit with the British public ever since his debut some 2 yrs ago. It’s the kind of reality TV career that sees him as the larger than life hero to reclaim British vigor in the Big Man division, but that also reveals him to be something of the panto villain with his braggadocio styled off the cuff challenges to big name British Heavies and silly Twitter feuds with Andre Dirrell.

These and other “transgressions” outrage his critics into a froth that whet their desire to see the 22 yr old Fury stretched for the count.

In spite of a smooth, impressive start, his career has started to spit and sputter as the 22yr old oversized manchild struggles to grow into his faster growing fame while negotiating  murky boxing politics that have killed untold numbers of talented hungry boxers long before he  was ever born. His notoriety has risen to the point where potential opponents expect to be paid well to fight him, and perhaps his team is not up to the tricky task of  negotiating fights at this level.

I note these observations on the eve of his attempt to claw his way onto the February 19th card at Wembley Stadium after his initial attempt to fight former WBO champ Frans Botha were shot down by the British Boxing Board of Control. More attempts with more prospective opponents followed, all to fall out for varied reasons, but now the breaking news is that a 30 yr old 6’5 Brazilian knockout specialist, Marcelo Luiz Nascimento, 13-0, 11 KO, only needs to pass the medical to be approved.

Marcelo Luiz Nascimento is precisely the ammunition Fury’s furious critics need to further ravage Fury’s career due to Nascimento being unknown outside of Brazil and probably not that well known within Brazil. With only 27 rounds in the bank against mostly novice fighters, it’s fair to say he is probably on level to Rich “Super” Power whom Fury battered about the ring last year in his American debut.

It’s also fair to say that regardless of whether or not Tyson Fury can make this Saturday’s Wembley card, he can never quite be the youthful, happy go lucky, big punching goof he used to be after his father and mentor, John Fury, was sentenced to 11 yrs behind bars after a fight at a car auction left another man grievously injured.

Bad news like this is not something a young man can plan for. It comes like the unseen sucker punch to the pit of the stomach that can leave anybody floundering about, struggling to regain their balance and bearings.

The whole family is in shock and will be forced to adjust, of course, but how this will influence the career of young Fury has yet to be played out.

The good news coming out of the Fury camp had been how legendary Manny Steward had seen fit to take him under his wing and show him a first class operation. As you can see, he’s getting some stellar sparring and seems quite happy to be training at such a level. It remains to be seen if Steward will actually work the corner for a fight, though.