Though their records are somewhat close, this fight is most likely a stylistic nightmare for Murray who is light in the power department and heavily dependent on a ring centered, low volume, counter punching style. Though Murray has never been knocked out, it’s almost inevitable that at very least the ref will be forced to step in to prevent anymore damage.

However, fighters are not always at their best in the moment and therein is the hope of Murray, that Golovkin will be off physically and mentally on the night.

The supporting card features British heavyweight prospect Hughie Fury, 14-0, 8 KO, up against Ukrainian prospect Andriy Rudenko, 26-1, 16 KO. The 20 year old Hughie is, of course, cousin and training partner of top heavyweight contender Tyson Fury. He’s making a comeback of sorts, his first fight since May of 2014 after reportedly becoming seriously ill and then suffering a death in the family when his uncle Hughie passed.

Rudenko was a developing nicely until he lost to Lucas Browne last year, so this also represents a comeback for him of sorts. Last year at their bests they would have been competitive with each other, but it’s hard to judge now given their setbacks other than the fight is likely heavy on action.

Don’t Cry For Me, Argentina–Sergio Martinez vs Martin Murray

Sergio Martinez has a dream homecoming come true when he puts his considerable ring accolades and WBC middleweight title up for grabs against the undefeated British contender, Martin Murray, 25-0-1, 11 KO. That’s almost a perfect half of the record of Maravilla, currently at 50-2-2, 28 KO. Not only is the paper record is owned by Martinez, but even more so the 50,000-seat Club Atlético Vélez Sarsfield in Buenos Aires where soccer riot rabid boxing fans will be  howling for their legend to put a proper whipping on the dreaded English lackey.

Such fare salves grievous injuries incurred after losing the Falkland Islands to the British decades ago is the way this particular nationalist type rivalry goes. More importantly, the Argentine government is subsidizing this little shindig to the tune of up to 5 million buck$ to bring his title home, a nice tribute to the late blooming boxing star. 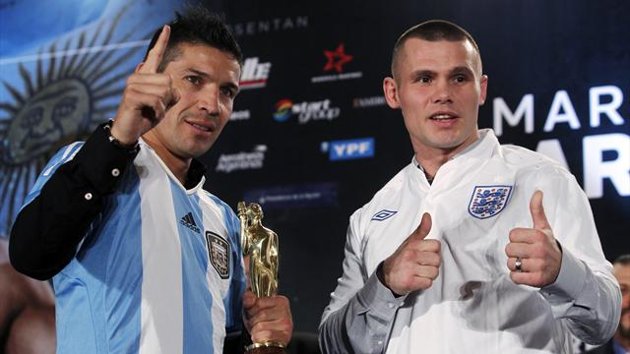 The experience discrepancy is further highlighted with 379 rounds for the 38 year old Martinez, almost triple the 132 pro rounds of Murray. The Martinez rounds over the past few years have been against the best boxing has to offer compared to the domestic oriented Murray who has only fought once out of the UK and only once against a world class fighter when he secured a draw against then world WBA champ, Felix Sturm in Germany in 2011.

Noteworthy are recent British challengers Matthew Macklin and Darren Barker being knocked out in late rounds by Martinez after significant struggles. Could be that Martinez wear and tear may be settling in after these many years of skyhigh Ring ratings as well as channeling the rabid hopes of fellow Argentines for whom he has become the number one sporting star of the entire country.

Martinez is coming off a very close encounter of the damaging kind as evidenced in his last bout against Son of the Legend, Julio Cesar Chavez Jr. Many so called “boxing experts” littering the media and antisocial media websites could never admit that Junior was dishing out some heavy punishment by the end of that bout much in the manner of his old man did to Meldrick Taylor in a truly epic battle. Martinez managed to hear the final bell with a wide decision win, but he was in no better shape than the all busted up Meldrick Taylor save a higher order consciousness and ring savvy that carried him to the end.

A 30 year old fresh boxer type might well be able to explore the recently exposed frailties of Martinez who sported wrecked out leg when he had to come off the canvas in the final round. I’ve heard rumors of shoulder surgery as well. No doubt Murray has a plan in place to box hard and smartly pressure to further exploit vulnerabilities, but as Joe Louis and later on Mike Tyson were fond of paraphrasing, “They all have a plan until they get hit in the mouth.”

Come this Saturday in Argentina, plenty of mouth to be smacked and jaw to be cracked as gum shields and game plans get knocked askew when these two tangle, either for further supremacy or a new legacy with a new sheriff in town.