The 6-9 Tyson Fury Emerges From Hibernation vs Sefer Seferi?

The considerably self maligned and self abused Tyson Fury makes his return to boxing after his self imposed 3 year hibernation this Saturday, June 9th @ Manchester Arena (formerly M.E.N Arena), Manchester to defend his Gypsy honor and “Lineal” heavyweight title against a 39 year old Albanian listed on Boxrec as the 2nd rated Albanian cruiserweight, Sefer Seferi.

Yes, Virginia, there really is a Santa Claus, and also a Tyson Fury as you can see here:

Before seizing the unified heavy title from future record setting HOFer Wlad Klitschko in the pink of condition and fight ready at 260 lbs.

Fit and ready to FIGHT!

twitter javascript:; @anthony_joshua boring hay! We see who is boring when U face me! A big bully is what you are u big dosser. Big femi your bully street name. I’ve seen your type many times. The man who can’t speak his own mind, the plastic Nigerian 🇳🇬 I’m more Nigerian than you! I’ll fly the flag for Nigeria when we fight. GYPSY MAN. Represents the world 🌎. Ali had words for a man like you, they were Uncle Tom.

Ahem, returning to a sense of decorum, Seferi is being dismissed as a cruiserweight who lost his last fight to the now WBA “Regular” champ Manuel Charr, but make no mistake folks, I reviewed that fight. This the 2nd ranked Boxrec Albanian dwarfed by modern heavies used ring movement and fast aggressive flurries to burn the Charr off Charr who simply got whooped badly. Thing is Seri is a nobody in boxing and there’s more money to be made propping up Charr, so there it is, the dirty underbelly of boxing.

The 6-9 Fury dwarfs modern heavies, so the fight has that comic ridiculous aspect to it, and it remains to be seen if Fury has enough skills left to catch up with this quick little ethereal waterbug, so the potential for Fury looking like a clumsy oaf is there waiting. 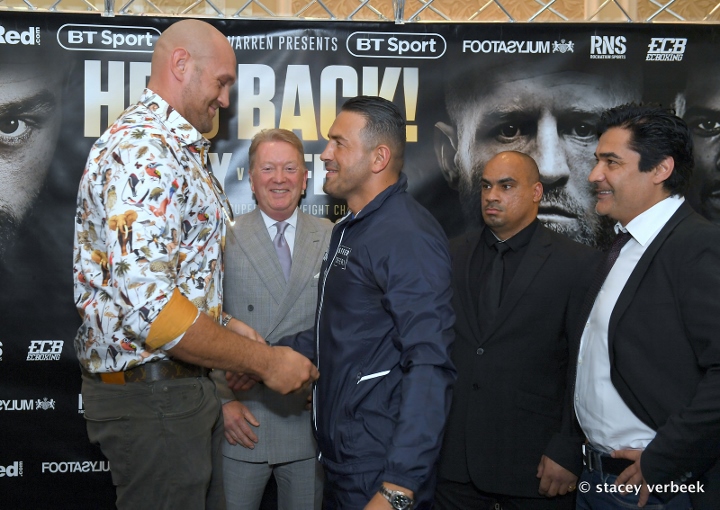 I predict Fury is looking for a nice, really fast handed, fleet footed spar and will adopt that early motivation, however, after running through a few gears and shaking off cobwebs, he lowers the proverbial (((BOOM))) Then we’ll be graced with more of the live action Tyson Fury juggernaut as he moves towards his big Anthony Joshua rumble in Merry Aulde England for both a King’s and a Queen’s ransom.