Sergey Kovalev vs Andre Ward~Oh, Dear, That Time Of The Month Again?

That is a downsized venue, about 1/2 the capacity compared to the T-Mobile of the first fight thanks to Ward and his promoter, Roc Nation, not bothering to promote this rematch despite holding the exclusive right to do so. Why are they even in the boxing business one has to ask?

Ward’s guarantee is $6.5 million, so why not kick Kovalev even more financially since they cannot otherwise hurt him in the ring. Kovalev’s purse is zero, nada, nothing for this fight. So Kovalev fired the first shot after he finished his portion of the last presser Thursday as he, his trainer, John David Jackson, and manager Egis Klimas walked out on Ward before he could take questions, a clear snub of the smug sense of entitlement by Ward who has done little to hone a hint of popularity in the sport. Kovalev has made Ward $11.5 million, probably treble his modest career earnings for context.

Maternity Ward did very little in their first encounter other than rush head first under Kovalev’s armpit resulting in the lockdown that Kovalev was repeatedly warned for by the dubious ref, Robert Byrd, until the desired straight up head to head buttfest was attained. That was mostly prevented by Kovalev with some nifty head butt feints and slips in close. That makes Kovalev the first fighter in ages who ain’t been headbutted open by Ward, the problem being Kovalev, as the big, strong, Russian born slugger, he ain’t supposed to have better defense than the featherdusting Maternity Ward.

Worse, Ward made himself as small as possible during the promotion of their first fight, highly touted by mainstream press and fans that cleared only 160,000 PPVs. Mainstream Americans don’t know who the last Men’s Olympic boxing gold medalist is, or if they did, they could care less about his heavily orchestrated hometown fights in an international era of boxing. The bogus decision was on the corrupt level of the first Manny Pacquiao vs Timothy Bradley Jr fight that sent the fans and the press screaming for justice in this dirty sport, but truth be told, all of this was foreordained in advance by those of us who watch how boxing continues to make itself irrelevant to the greater public. Kovalev does his part with knockdowns and knockouts to little credit or financial reward: 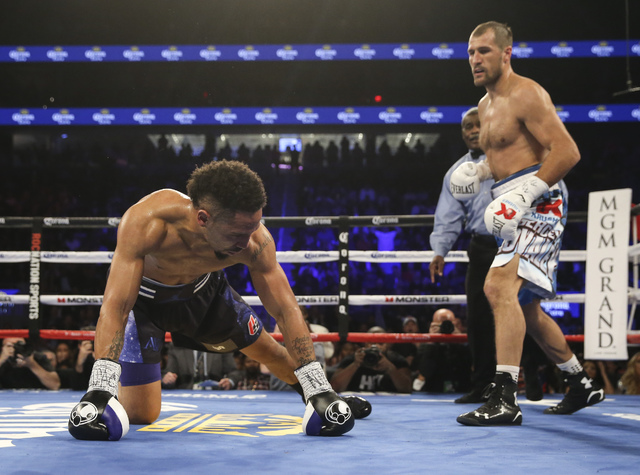 The high & mighty on all fours tail between his legs

Then we have Ward signing up with VADA drug testing before backing out weeks before the rematch, all while Kovalev continues his own VADA testing that has led to accusations by fans of juicing by Ward. Now that Bernard Hopkins has retired, is Ward the new King of Stink?

Maternity Ward’s growing shoe collection would be a more exciting look than smelling him stink over the big screen on a traditional celebratory Saturday night for sports fans. Could he make enough money to buy out the shoe collection of his heroine, Filipino First Lady Imelda Marcos who sported 3000 pairs of shiny shoes in her pomp, all carefully arranged in a closet about the size of your average 3000 square foot American middle class home?

Sad to say American fighters are now populated with the worst stinkers and poseurs in boxing these days of dwindling boxing interest, so, here we go again with another roll of them dice of destiny in a supposed P4P rematch on PPV that even fewer will watch this time. Imelda & All Her Precious