That Time of the Month~Tyson Fury vs Deontay Wilder Sequel

Dateline: February 22nd, 2020 @MGM Floyd is where the Clash of the Titans Sequel premieres as Tyson Fury does the remake with his new panto nemesis in crime, Deontay Wilder, after a trash riddled month of posing, posturing, and preening their inner idiot.

The Prequel was a somewhat nondescript fight proposal 9 years ago when they should have fought as highly touted prospects, but didn’t for the usual reasons endemic to boxing. Fury was already far ahead in development though, an excellent reason for the minders of  Wilder to stay far, far away from that fight.

This was my leadup to the main event just over a year ago, regrettably a few years past when they should’ve fought:

That “wake me up when they’re done” battle saw Fury jukin’ ‘n jivin’ Wilder who replicated an uncoordinated park statue when not thrashing haymakers. Then the 9th and 12th round explosions by Wilder woke up everyone with the 12th seemingly one of the most fatal knockout explosions I’ve ever witnessed, a rare, freestyle combination by Wilder.

What happened next is a subject worthy of boxing legend and myth when Fury slammed the canvas flat on his back seemingly out for the ages beyond this one to immediately open his eyes for a wink at the ref, a signal by Boxing’s clown prince that he was was alive and having a world of fun.

No doubt the skeptical ref Jack Reiss gave him an extra 10 seconds once over after he barely beat the 10 count as is common practice in these modern health of the fighter days, especially in the Staples Center, Cornflakia, but still, who ever expected Fury to continue to take the fight to Wilder between their mutual clinching?

That was then and this is now. Fury has been clowning around with 2 undefeated fringe contenders. See his bloody last fight:

Sandwiched in between the 2 sanctioned boxing fights, Fury had a meaty, dangerous stint of WWE against a 6-8, 370 lb mountain of muscle name of Braun Strowman who put some truly serious hurt on Fury with a vicious body slam before succumbing to the orchestration. 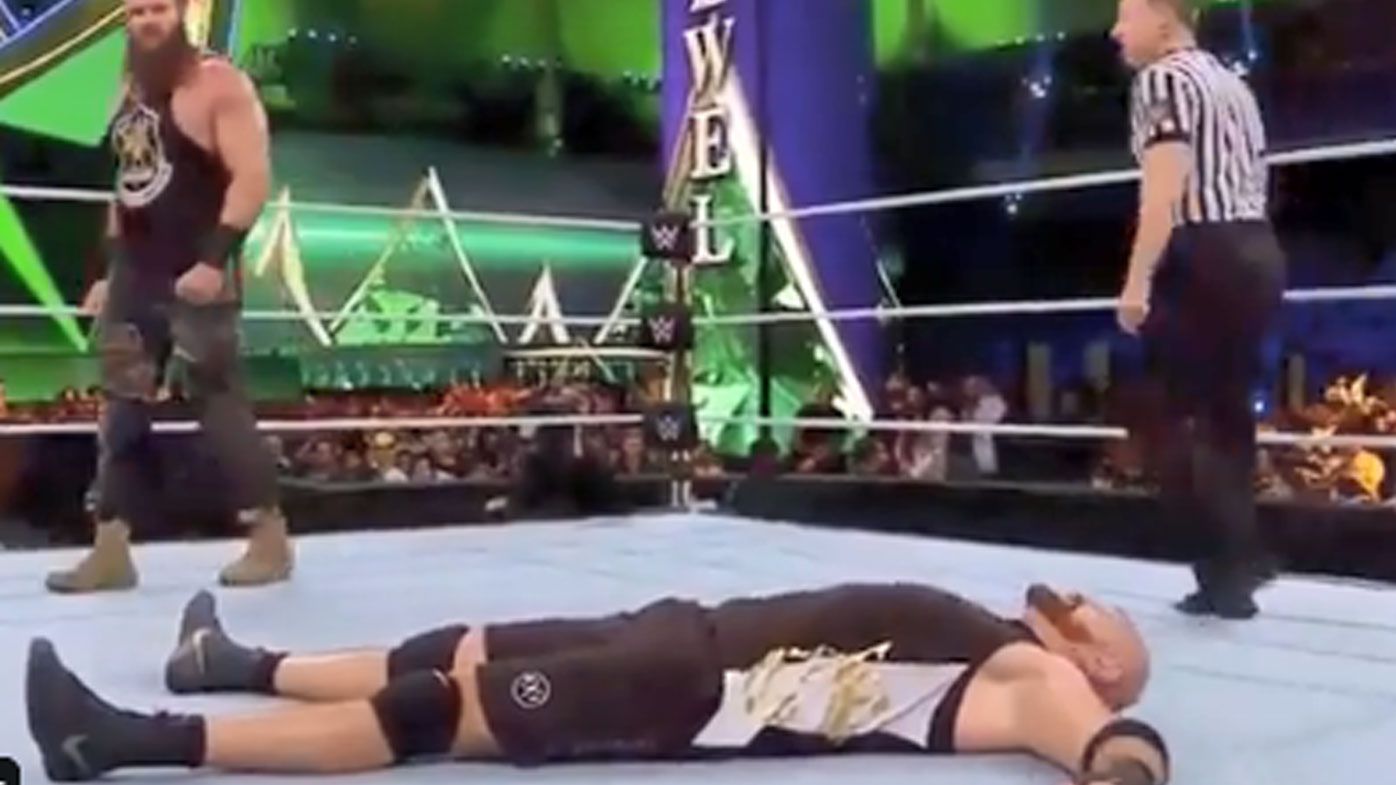 Wilder during that interim rematched with a geriatric heavyweight on blood pressure medication that he had already knocked out. Wilder got knocked around some more before knocking him out yet again, and then dispatched a fringe Uncle Al contender, so each still remain something of an unknown going into their “Not Ready For Primetime” sequel.

“The Story” of this fight is that the Candies at Ring Magazine have made their once coveted Ring Belt available to the winner. Fury already owns one Ring belt after his victory over Wladimir Klitschko, yet he immediately forfeited that title that he never defended during his mental meltdown while consuming mountains cocaine and cuisine to blow up to 400+ lbs.

Since those dark days, Fury has dropped 150 lbs, just enough to skeeter around the ring as weak as a kitten to clown his weaker opposition. He is nowhere near his peak when he dethroned Wlad, and likely won’t ever be again. No matter who wins, the winner will be heavily flattered regarding his capability. Especially by The Ring who has apparently dipped deep into the tin “Cracker Jacks” trinket business.

Disclaimer: I used to be very impressed with Fury the boxer and iconic comic very much like a young Ali, undefeated and always clowning around in and out of the ring and otherwise having a great time. Never been impressed with anything about Wilder save his Knockout quality right hand and his ability to absorb beatings to land it.

Our intrepid Gypsy King loves to remind us that “No Man born of his Mother” can beat him, but a gaggle of men in monkey business suits born of their mothers may well turn the trick…(Insert Yawn)…only in boxing folks!

Tagged "No Man born of his Mother", "wake me up when they're done", "You know who", Al Haymon's personal bunker., cracker jack trinkets, deontay wilder, monkey business, tba, That Time of the Month, Tyson's Fury, wbc

CC Your Buds~Canelo vs Cotto Is ON!

Mandalay Bay Casino in Las Vegas will be exploding come Saturday, November 21st when Saul Canelo Alvarez and Miguel Angel Cotto renew the historical Mexican vs Puerto Rican family feud with a real fight, can you believe it, a real fight in America? Who’d have ever thunk it in this faint hearted day and age of posers, duckers, and bawling punch monkey darlings? Could even be a fight for the ages, but at very least we know from their pedigrees it’ll be good as long as it lasts.

The new promotional kid on the block, Roc Nation, and Golden Boy will share promotional honors after a heart stopping, grueling set of negotiations with Cotto who has lately become something  diva, one of the concessions needed being the 155-pound catchweight. Up for grabs will be Cotto’s Ring Belt and the WBC middleweight belt that he is reported as earning $30 million to defend compared to Canelo’s $10 million. I would have thought the purses would be roughly even after their similar recent PPV numbers, but such is another huge concession that Canelo takes for the opportunity of a lifetime.

Luckily Canelo has been well priming himself for this big bout at 155 with his last three outings at the weight where he did quite well for himself, knocking the doggie biscuits out of Alfredo Angulo and James Kirkland and forcing Erislandy Lara into a shameless run, shuck, and jive for survival.

Meanwhile, Cotto hasn’t been doing too shabby himself with conclusive knockouts of Sergio Martinez and Daniel Geale. Why he insisted on a silly 159lb catchweight against Martinez? Because he can call more shots at this stage of his career. In making the Geale fight at 157lb, now I could understand as that’s a sweet three pounds under the middleweight limit, but I don’t think those catchweights affected the results anymore than this one at 155lbs will. However, if the winner tries to make Gennady Golovkin make 155, that could be the straw that breaks the camel’s back. Cotto might try for that kind of fight, but I think Canelo is ready to move up permanently to the full 160 where he obviously belongs if he wins this, but their futures are not ours to see. First things first.

In a bad sign of the declining times for Andre Ward, amazingly only 31 years of age and wasting his career away, he is supposed to be fighting another light heavyweight type opponent. Ahh, ha you say, another TBA sacrificial lamb for the needy Ward is it again? Yup, dragged him all the way kicking and screaming out of Oakland they did for this. He can’t even make the cut for the main supporting bout of the night anymore, just pitiful. His heart must be buried in that big load sagging his shorts for this farce, but it’s his career to fritter away, so be it.

Oh, yes and oh, no, so now he can’t even glove it up for his TBA after having a knee problem, so looks like Mr. TBA will just have to wait until 2016 to find Ward in a ring…maybe. What a loss to TBA boxing!

So enter yet another faint hearted P4P poser added to the undercard, Guillermo Rigondeaux , reportedly fighting a last minute TBA, Drian Francisco. World P4P rated by Haymon/Golden Boy News of the Ring Word and still fighting TBAs is it? Such is the fainthearted nature of boxing these days.

As to the otherworldly compelling main event, I strongly favor Canelo. Cotto’s older brother, also named Miguel, managed to rock the teenaged Canelo, slumping him for maybe a second before he recovered quickly to blast the senior Cotto to smithereens shortly thereafter, so could be Cotto has some younger brother payback working here his motivation. Even in his losses, nobody ever had an easy time against Cotto who has added significant caginess to his game to compensate for his fall from the absolute top of his prime. Problem being that Canelo is immensely stronger and even more experienced than Cotto by now, yet still very young and fresh. Simply put, he’s never been beat up. However, trying to walk through Cotto from the gitgo may well be the equivalent of trying to walk through a truck, so I expect Canelo to take his time warming into the fight as a boxer as does Cotto. Then all Hell gets unleashed for the finale.

Yes Sir, Freddie Roach has got Cotto boxing smarter than ever, and Canelo is a high level boxer, so this should be a traditional, high level stakes, aggressive, ring centered boxing display with plenty of applied hurt and heart. Neither comes out completely unscathed in this one, yet the fans may count themselves lucky to remember where they were on this monumental night if the fight is as good as is hoped.