Tag Archives: When Plan B Turns to Gold

Pacquiao vs Mosley–When Plan B Turns to Gold

Try as many times as he may, Manny Pacquiao simply cannot entice Floyd Mayweather Jr into a geniune all time prize fight, the richest in history even at the most conservative estimates.

Mayweather has been beset by doubts and legal woes from the start of his 2009 comeback, all while carefully dancing around Pacquiao’s fight schedule, teasing, taunting or defiling the honor of Pacquiao. Then he pulls out of both fights after repeated transcontinental flights by team negotiators, endless phone calls, and tedious, extended talks were  conducted with the terms finally agreed upon.

Fortunately, Pacquiao has a savvy, experienced promoter in Bob Arum looking out for his boxing interests, and he has kept promotional plans B and C handy for practical use. There is no need to risk delaying or even losing lucrative fight dates and promotions while fruitlessly waiting for Mayweather to work his way through the maze of the some half dozen criminal charges against him so Mayweather can man up to the challenge the public has been calling for for over two years now.

Moreover, Arum has pulled off a real sweet deal with his Plan B in what may alter the future of big boxing promotions by negotiating a deal with both Showtime and CBS, stunning the HBO juggernaut that has been fading badly these past few years and now struggling in hard economic times.

CBS will provide a substantial part of the promotion by airing the Fight Camp 360 prefight series on free terrestial TV, exposing the electric boxing career and public sector life of Manny Pacquiao to a broader viewing audience who may wish to know more come fight night. As such, Shane Mosley arrived perfectly poised at the exact best time under the best conditions to secure what may well prove to be his biggest ever, most lucrative fight and that in the twilight of his career.

Quite a turnaround of good fortune for Mosley who was clueless the last 10 rounds of his 2010 fight against Floyd Mayweather Jr and then looked terribly awkward and off balance in his next fight against Sergio Mora.

Naturally, critics have had a field day savaging Pacquiao and Arum for fighting what many consider a fighter well past his best form, but someone must have forgotten to tell the rest of the independent ranking orgs such as Ring, Boxrec, and Fightnews, all of whom have Mosley well ranked. Ring has him #4 welter, Boxrec has him #3 welter and #22 P4P, and Fightnews puts him at #3 welter.

I personally think the 39 year old Mosley has been well overrated for some time, but Arum is doing what a good promoter should be doing, securing a top fight to leverage for all its worth to make money for everyone, and Mosley provides an excellent supplemental promotional storyline for this occasion.

We can’t ignore that Arum also “sticks it” to his main rival, Golden Boy Promotions with the defection of Mosley to the Arum for this fight. That makes the 2nd business partner to cut his business ties with GBP after Marco Antonio Barrera left a few years back.  Bernard Hopkins has also been making threatening noises from time to time as well.

Juan Manuel Marquez is not a business partner with GBP, but he has been grumbling after being left on the sidelines by the Mosley deal, unable to secure his own dream Paquiao rubber match. However, Arum has been talking up Marquez as Pacquiao’s next fight assuming he beats Mosley, but maybe everyone should check out this past week’s upsets before taking negotiations as fait accompli .

It was Oscar de la Hoya who revitalized the tattered careers of Marquez, Mosley, Barrera, and Hopkins, making them more money in their last few fights than the whole of their careers beforehand, yet this surly bunch seemingly have no thanks or loyalty for their benefactor which is their choice at their own peril I guess.

Arum has made it clear that there will be no co-promotion with a competitor in making a Pacquiao fight with the sole exception of a Floyd Mayweather Jr fight suddenly materializing.

Fat chance that happening, but how about the chances of Shane Mosley pulling off the upset you ask?

Boxing is a funny business because it’s the only major sport where a competitor can be comprehensively shut out and turn things around with a single action, where one good knockout punch can trump a thousand and one excellent punches in a heartbeat as Floyd Mayweather Jr almost found out when knocked temporarily out on his feet after Mosley caught him with a big time right hand. 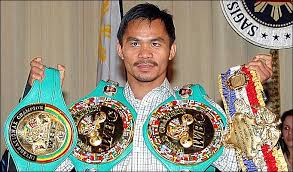 Any fighter who can deliver a punch like that cannot be blithely dismissed out of hand as many will do against the vastly superior near prime Pacquiao. I say near prime because I’m not yet convinced he can be both a serving Congressman for his people and a fighter at his best at this point in his career.

Regardless, the 32 year old Pacquiao is at an apex of his career and still in the latter phase of traditional prime athletic years compared to Mosley who has been going up and down like a yoyo as he winds down his career.

Mosley says he wants to fight on for several more years, so is surely motivated to make a good showing against the greatest fighter of this last decade and one of the all time greats for sure, but even beating a Pacquiao off his best form would be a tall order.

The biggest problem for Mosley is that he has a history of being handled by excellent boxer types. Freddie Roach has been adding layer after layer of boxing nuance to Pacquiao’s considerable slugging skills and I don’t see what Mosley has to counteract Pacquiao’s boxing save a “lucky” shot.

So the fight will likely play out as predicted with Pacquiao outworking, outboxing, and outslugging a game to go Mosley in the opening all action stanzas, and then comes the beating and perhaps Mosley’s first ever stoppage loss.

If Pacquiao beats Mosley, he will have demolished the dominant top 5 ranked welters of the past 5 years, what many regarded as a golden era with Margarito, Mosley and Cotto also rated as P4Pers and of course Clottey rounding out the division. Other than the Marquez rubber match or Mayweather signing a fight contract, there is nowhere left for Pacquiao to go for big fights, but he says he wants another 2-3 yrs, so we shall see.

So onwards to Saturday night, May 7th at the MGM Grand, Las Vegas if you want to see about catching greased lightning in action when Manny Pacquiao executes what should be an exciting Plan B for as long as it lasts.